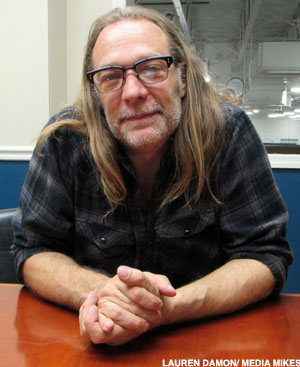 Special makeup effects master Greg Nicotero has worked on The Walking Dead since day one crafting the amazing zombies and gore that have helped make the show, currently in its fifth season, the worldwide phenomenon it is today. No where else was the fan hysteria more evident for the show than at this past weekend’s Walker Stalker NYNJ Convention at the Meadowlands Expo Center. While current cast members were barred from speaking with the press after a shocking midseason finale, Nicotero sat down with me to discuss his progression from special effects makeup to directing episodes of the show including this season’s gruesome premiere. I also got some of his thoughts on longtime collaborator Quentin Tarantino’s next film.

Lauren Damon: How did you decide to move into directing your own episodes and how do you decide which ones you’re going to direct?

Greg Nicotero: It all started from Frank Darabont because after season one— before we started season one, I’d directed a little short film and season one I was the second unit director. So there were a lot of times when we were shooting and I would call Frank in Los Angeles to say ‘Hey, I think we could probably use a little more footage here, maybe we need a little bit more here…’ so I had an eye for what the show needed. So when we started season two he said you should direct an episode. And I said I would love that. And he said ‘Do you want to direct a zombie-light episode, or a zombie-heavy one?’ And I said that’s a trick question! But I ended up ironically getting the episode where Dale gets killed and it was probably the most dramatic episode we had done to date. Because it was a bunch of people in a room sort of having this tribunal to decide whether Randall should live or die and it had one zombie in it. So it went from that to three episodes in season three and three episodes in season four and I did four episodes this year. So I’ve directed eleven episodes. [Showrunner] Scott Gimple is really good at sort of pinpointing which episodes he wants for which director but he’s had me direct the premiere for the last two years and I directed the finale this year too.

LD: That trough scene this year in the premiere was really traumatic…

GN: Oh it’s horribly traumatic! And I’m really proud of that scene because I feel like Scott and I really crafted that scene together. Because he pitched the original idea and we had really sort of both kind of immersed ourselves into making it as good as it could be. And I remember, the first time we screened it for the crew, I leaned over to Scott at one point and I went ‘I wonder if we went too far’ because it’s so uncomfortable and it’s so brutal and it’s so relentless. But the truth is, Terminus had to be portrayed that way otherwise it wouldn’t have felt authentic so I’m really really proud of that.

LD: At this point, can you still creep out the cast or they a little bit desensitized to it?

LD: Do you have a resident team of players for the zombies, or do you go out to cast your ‘hero’ zombie parts?

GN: There are people that we use, that we like over and over again. I say there’s probably fifteen to twenty people that we really like and the beauty of the makeup is we can make them look different every single time. There’s a guy named Coleman Youmans I think he’s probably played the most zombies in the show ever. Because we’ve used him almost every episode for the last two seasons we just make him look different every time.

LD: You done it a couple times—

GN: I have. I didn’t get a chance to do it this year because I directed four episodes but my goal next year will be to be a zombie in a scene that I direct so I can just direct in zombie makeup which I just think would be fun.

LD: I’m getting the signal to wrap up here so finally I was wondering having done Quentin Tarantino’s movies since Pulp Fiction, are you working on The Hateful Eight? And if so, can you share anything about it?

GN:  Yep and not really…I just got back from we did some makeup tests yesterday and we start shooting the beginning of January. It’s–I love the script. I find it fascinating that Quentin has been doing live reads, table reads, of all his scripts and I feel like this script is a result of those table reads because it feels like a play. It’s a bunch of great characters in two locations but it really has that great emotion, that great power, but it takes place in minimal locations. I really love the script. It was—You know, I mean I’ve read all of them and it’s just something different enough from the other things that he’s done but it’s still with his voice.

The Walking Dead returns—with an episode directed by Nicotero—on February 8th at 9pm on AMC.

WalkerStalker Conventions continue in six more cities through next Halloween, for more info check out their website.