I’m sure regular Fox News viewers still believe that former CEO Roger Ailes was a “victim” of the #MeToo movement. But those people probably never troubled themselves to read the avalanche of allegations leveled against Ailes, which spanned decades. The truth, which still hasn’t necessarily seen the light of day, attempts to be told in “Bombshell.”

When we’re first introduced to Ailes (Lithgow), it’s through Megyn Kelly’s (Theron) narration. She’s breaks down the structure of Fox News and how each part of the multi-floor business in downtown New York City functions. During her walkthrough, we see Ailes, micromanaging every detail, from the chyrons on the TV to the length of a news anchor’s skirt. It not only shows how disgustingly creepy he is, but how obsessed he is with the content that Fox News puts out on a daily basis. While it’s certainly interesting to see the monster and his tentacles at work, “Bombshell” isn’t necessarily about him, it’s about the damage he did. It’s when we meet Gretchen Carlson (Kidman) that the wheels are set in motion. We learn that she’s waiting for the hammer to fall because she’s slowly been building up a case against Ailes.

As much as I enjoyed “Bombshell,” I can’t help but feel it could have been better. Writer Charles Randolph, who previously worked on the magnificent film “The Big Short,” doesn’t dig in deep enough to reported mudslinging that was happening behind-the-scenes. It doesn’t help that he’s working with director Jay Roach, who was criticized for the inaccuracies riddled throughout “Trumbo.” With their combined forces, they’ve put together a film that never swings as hard as it should. That may be because there isn’t enough evidence to support some of the more inflammatory and horrendous incidents portrayed on the screen.

Like I said though, this is an enjoyable movie. There are moments that feel like they’re trying to emulate Adam McKay’s style from “The Big Short” and “Vice.” They don’t quite match that style, but they do a tremendous job making us sympathize with some incredibly flawed individuals. Kelly, as pointed out in the film several times, has made some comments and remarks that are not only divisive, but intentionally offensive. One scene in particular shows her arguing that Santa is white and should always be white. It’s an unnecessarily despicable belief that’s intent is to infuriate, offend and divide, but it’s far from being a belief that warrants the kind of treatment she received by her colleagues or the sexual harassment she was subject to.

As for the main cast, they do a magnificent job with everyone they’re portraying, whether they’re the spitting image of their characters or replicating their mannerism to a ‘T’. Theron does a tightrope act with Kelly that’s unmatched, and Lithgow channels the monster that was Ailes. Some of the “cameos” are more distracting than they are funny, like when Richard Kind portrays Rudy Giuliani. “Bombshell” is equally energetic and unnerving, making it a rollercoaster of a time, but despite its title it doesn’t have any Earth-shattering revelations, and it certainly won’t change any of the minds who tune into Fox News every day and night. 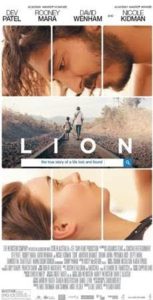 I’ll admit up front that I am a sucker for films that deal with adoption. I was adopted when I was 18-months old. Inspired by the film “Antoine Fisher” I eventually tracked down my birth family, learning that I was originally the middle of 11 children. That’s right – thanks to a movie I found 10 brothers and sisters. So when I learned that adoption plays a large part of the film “Lion,” I was anxious to see it. And I’m so glad I did.

It is the mid 1980’s when we first meet the young boy Saroo (Sunny Pawar in an amazing performance). Saroo idolizes his older brother, Guddu (Abhishek Bharate). He follows him around and helps him steal coal from the mining trains that pass their small village. They sell the coal for money to help their mother, who works as a laborer carrying rocks! Yes, even in the 80’s people still got paid for carrying rocks. One night, against his better judgement, Guddu agrees to take Saroo with him. The boys get separated and Saroo finds himself on a train taking a journey that takes two days to end. Now alone in the bustling city of Calcutta he must live on the streets. Unable to speak the language (he does not speak Hindi) and unable to find his village featured anywhere on a map, he is placed in an orphanage and eventually adopted by a family in Australia. In the blink of an eye he goes from poverty to wealth and grows into a well-adjusted young man. But he never forgets his past and the family he left behind.

Powerful. That is how I’d best describe “Lion.” In a way I consider myself lucky that I was adopted as a baby. I had no idea the loving family I had been taken from. After meeting my brothers and sisters I learned that I was the family “urban legend.” The oldest child, my brother Anthony, would tell the others that they had a brother “out there” somewhere. When I met Anthony he told me that for quite a while after my birth and subsequent disappearance he would sneak out at night and look for me. My only memories from my youth are of myself and my adoptive parents. To have been age five when I was separated from my family would have been beyond traumatic. Young Mr. Pawar gives an award-worthy performance as the young Saroo. As does Dev Patel, who plays Saroo as a young adult. This is a film made up of moments. Whether it’s Saroo with his girlfriend (Rooney Mara), or his adoptive parents (Kidman and David Wenham) or just him alone with his thoughts, each moment builds on the next. Bring your Kleenex!