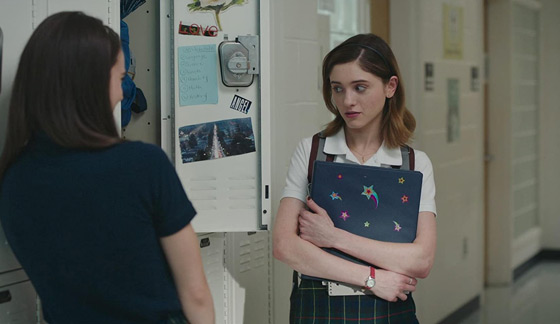 It’s possible I’ve mentioned this before in my stint at MediaMikes, but it bears repeating that I was a Catholic school student at one point in my life. One of the most memorable things during those four years was the sex education. It was a fairly basic education, where boys and girls were divided into separate classrooms and given the lowdown. While they explained sex in the most basic manner, much of the sex education curriculum was built around sin. Masturbation is a sin. Pre-marital sex is a sin. Pornography is a sin. The curriculum is counter-intuitive to the modern adolescent experience and “Yes, God, Yes” takes a nuanced look at the relationship between puberty and religion.

While I’m sure some people will view “Yes, God, Yes” as a 90s coming-of-age film, I’d like to believe it’s a bit more than that. 16-year-old Alice (Dyer) tries to be a good girl in the eyes of her parents, school, priest, and God. But that’s complicated when something happens while at home after school one day. She logs on to AOL (for people younger than me and older than my parents, AOL was the Internet log-in go-to) and is approached by an anonymous user in a chat room. He asks her sexual questions, sends her a nude photo, and wants to cyber (for people younger than me, and my parents age and older, I don’t want to explain that one). Compounding her sexual feelings from this brief AOL chat is a private church retreat where her sexual urges and religious beliefs collide.

Surface level, the movie is a great dramedy, with its intellectual digs at Catholicism. Beneath that surface, it highlights the failures of anti-LGBT practices and abstinence only education. The message buoyed by the emotional tug and pull that Alice faces as she tries to handle her friends, classmates, sexuality and personal beliefs. I feel like the film’s greatest strength is finding a specific grey area where it teaches instead of lectures. I won’t give it away, but the movie does a great job at showing how the hypocrites are consciously aware of their own moral pitfalls. Alice slowly uncovers how her classmates and church leaders are all guilty of the sins they believe they’re combatting. While they are made out to be hypocrites, the movie shows how conflicted they are, just like Alice.

The summer of 2020 may be remembered for all the small gems found on streaming services. “Yes, God, Yes” is one of those indie films that will delight audiences. It tickles the funny bone with crass humor and awkward situations, while buttering us up with a very sweet, sentimental tale about hormones and finding ourselves. While moments of “Yes, God, Yes” are painfully realistic, it reminds the viewer that sex is sometimes uncomfortable, odd, and confusing for everyone. While everyone has different views on sex and the discussion revolving around it, “Yes, God, Yes” shows we’re all stuck in the same boat. Our sexuality is as integral to our life as much as our personal politics and religious affiliation.