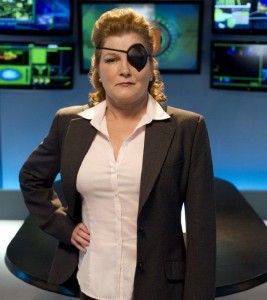 Kate Mulgrew is known best for playing Captain Kathryn Janeway in “Star Trek: Voyager”. She is also taking the leadership role in her role in Adult Swim’s “NTSF:SD:SUV::” playing Kove. In one of the funniest shows on television shows on the station, the show just started its second season. Media Mikes had a chance to chat with Kate (while I was attending “Star Wars” convention, sorry Kate) to chat about this great show and how she keeps it serious.

Mike Gencarelli: Tell us how you got involved with this crazy yet amazing unique show “NTSF:SD:SUV::”
Kate Mulgrew: The comedic genius otherwise known as Paul Scheer called me up and told me they want me to play this sort of Captain for a terrorist strike force. They wanted me to pattern myself after M from James Bond. I said immediately “Count me in, say no more”. Of course I had no idea what I was getting myself into. I knew nothing about these 15 minute episodic shows or procedurals for that matter. But I said “If he is setting it up I am along for the ride”. I am so glad I did because it such a great group.

MG: How do you keep it serious when giving some of your hysterical lines?
KM: You can imagine what the discipline is like. Sometimes it is agony in order to get those lines out without cracking up. It’s agony to keep a straight face. Some of the things they ask us to do is crazy. I am surrounded by really comedically gifted people and am always on my toes. I am the only straight man in the group and I think that is what works about it.

MG: How do you feel season two compares to the first?
KM: This is the better season in every sense. We had to take the first season to get our “sea-legs”. Everyone was shooting blind. This is far more grounded. WE were more relaxed. Everything was in place. The writing was there. The characters has been developed. So we just went for it. Adult Swim is just the best.

MG: Do you feel that due to the 15 minute format, does that pose any challenges for you?
KM: I think that is the beauty of it. For some odd reason – or maybe all the right reasons, if you’ve only got 15 minutes to tell a story and the audience is aware of that, not only is the story going to be tight and very funny but the audience is going to be extra attentive. If you use those two things in combination, and in generally speaking, you will have a success.

MG: Sticking with the leadership role; can you reflect your role in this show to playing Captain Kathryn Janeway in “Star Trek: Voyager”?
KM: Mike, whether it is a Starship or a terrorist strike force. I take my duties equally serious. You understand? I save the day…and this time I am doing it with an eye patch! [laughs]

MG: What else can we expect from you upcoming?
KM: I just did a wonderful movie this Spring called “Drawing Home”. Next year, I am doing a play in New York called “Somewhere Fun”. I also have a recurring role as Jane Lattimer on “Warehouse 13”. So I am keeping real busy!