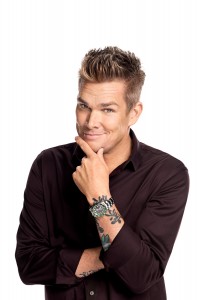 Mark McGrath is known best as the front man of the rock band Sugar Ray. McGrath is also known for his work as a co-host of “Extra”, and he was the host of “Don’t Forget the Lyrics!”. Mark is taking over the role of host in truTV’s hit reality series “Killer Karaoke”, which premieres February 20th. Media Mikes had a chance to chat about the show with Mark and find out what can we expect.

Mike Gencarelli: You are no stranger to hosting; what drew you in for “Killer Karaoke”?
Mark McGrath: It was a slam dunk for me, honestly. It involves performances, karaoke and live animals. That is just the perfect triad for me. I said “I am in! It sounds like a typical night in the 90’s for me” [laughs]. I had seen the show last season and I was a big fan of it as well. It is interesting that when I first saw the show, I thought to myself that it was such a great hosting gig. Then I literally got a call two months later. It was just a no brainer. A good buddy of mine, Tony Yates, is the CEO of the production company, Zodiac and I worked with him before on “Don’t Forget the Lyrics”. I was always impressed with the way that Tony puts a show together. I spoke to Tony and he said the show was “Killer Karaoke” and I said “I’m in! Where do I sign?”

Mike: This show is very funny, I wouldn’t be able to not crack up if I was hosting…
Mark: I knew the show was going to be funny Mike, like I said I’m a fan but I was doubling over in laughter the entire season. I was ruining takes because I would just keep laughing and they would have to start over. It was so funny. The contestants are amazing. I think that the thing I took away most from the show was how funny it actually is watching the show in real-time and that the contestants can really sing. All of them sing better than I do [laughs]. That is the scary part, I am not kidding you! [laughs].

Mike: Tell us about the fresh, new format and how it differs from season one?
Mark: I think they really brought in some geniuses to increase the gameplay and really get you involved with these contestants and get an emotional component for them. The show just seems to have a little more gravitas now. Steve-O hosted the first season (read our interview here) and those were huge shoes to fill. He was a perfect match for this show, so I am honored to take the torch from him and carry on.

Mike: What kind of hilarious and unexpected challenges the contestants can we expect from this season?
Mark: I think what is great about this show is that it is all about spontaneity. You never know what is around the corner. The contestants never know what they are facing. But they know that there will be a fear element. One of their biggest fears will be met. You throw a little bit of karaoke in there with a live audience and it is quite the fun afternoon. When you have live animals…you cannot control them. I am looking at the side of the stage and I am seeing 300lb animal handlers. I am wondering “What are those guys for” and then I look around and you see camel heads, snakes and spiders backstage. You just wonder “What are we in for today?” It is fun because you not only have the fear element but it is mixed with the surprise element and the laughter element. You never know what is going to happen. Then on top of all that you have to sing….on key. I think that is what makes this show so great, anything can happen…and it usually does.

Mike: I tell you one thing Mark, in the episode I watched this season, a contestant had to sing in a helmet full of spiders…I do not do spiders man [laughs].
Mark: Listen Mike, I don’t blame you dude. Let’s just say people literally come face to face with their greatest fears. Some of the things that these contestants have to deal with that you wouldn’t think would be to intimidating like Canadian Geese, let’s just say, you would be surprised. If you get two of them together in little pen, they start making these shrieks and it’s crazy. But they are wild animals man and you can’t forget that. These animals get treated really well man. In fact they get treated better than I do man, they kicked me out of my dressing room to bring in the Canadian Geese [laughs]. The earth has provided us with some pretty incredible creatures and “Killer Karaoke” is happy to put them on a TV show.

Mike: How do you think you would do if you were put in these contestants’ shoes?
Mark: I am the biggest baby. This is something I found out about doing this show [laughs]. I am afraid of everything. I think “I am a man. I can handle this. I toured in the 90’s. I lived on a bus with 10 guys for 12 years. I HAVE SEEN IT ALL! Bring it on!” But I would never put my hand in a scorpion pit, no matter how much money is attached on the back of the scorpion. I am not grabbing it off the back of the SCORPION! I do not think that there is one challenge that I would do. There is one called “Leader of the Pack”, which is a dog challenge. It is the scariest thing to see those dogs running at you full force. Even with the protective suit on it would be very intimidating. I would be terrible man. I am afraid when I see a cockroach at night and I run. I am not kidding you. [laughs].

Mike: Lastly, on a musical note; please tell me you are planning to come back to the Eat to the Beat Concert series during Epcot International Food and Wine Festival this year?
Mark: Oh Mike, that is one of the things that I look forward to most all year. I have had the good fortune of playing there four years in a row now. It is interesting, when I first started playing my wife was pregnant and now last year, I brought my kids up on the stage, which is so cool for me. It is so much fun. I love coming down to Disney World for a week and spending the time with the kids and just having fun during the day and then getting to play three shows at night to some killer crowds. It is so much fun. So I am standing by the phone and I hope to be there again this year!