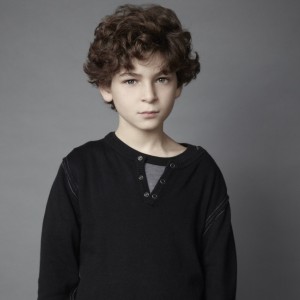 David Mazouz stars opposite of Kiefer Sutherland on Fox television show “Touch” where he plays the character of Jake Bohm an emotional disturbed 11 year old with the ability to predict the future. The show is set to start airing its second season at the end of February and Media Mikes was fortunate enough to be able to talk with David about how he first got cast in the role and what it has been like working alongside Kiefer Sutherland.

Adam Lawton: What was it that interested you in wanting to become an actor?
David Mazouz: I was actually only about 6 years old when I started taking classes. I don’t think I knew what I wanted but I loved the class and I went for 3 hours a week for a year before my commercial agent saw me and asked my Mom if we could meet. When I started going on auditions for commercials, I loved that too and the more I auditioned and began booking things, the more I loved it.

AL: Can you tell us about the process you went through to get the role of Jake Bohm?
DM: It was a 6 audition process over the course of about 6 months. It was put on hold after my first call back because Kiefer was in New York doing a play on Broadway. I knew the Casting Directors because they hired me for a television movie before. For the fourth audition, they flew me out to New York to read with Kiefer. The last 2 were in Los Angeles. There were times where I really didn’t know if it would go any further so every time I got to go to the next step I was really excited because I loved this character and the script. When I eventually found out I got the role, I was on vacation in Palm Springs for a holiday. I was in the recreation room with my best friend and we were playing a game and his Brother came in to get us and take us back to the room where there were other friends of mine and my Sisters and they all watched while I took the call from my Agents. I was in shock and so happy that I screamed.

AL: Has it been difficult for you playing a character that for the most part doesn’t speak?
DM: Actually I do speak in the voice over’s but, I think it was easier to not speak in the first season because everything was so new and I was really getting into the physical character of Jake; how he walks and behaves. I do love speaking in general and people tell me I talk a lot. I don’t want to spoil Season 2 for the audience but I’ll just say that Season 2 is different in many ways than Season 1. It’s easier in some ways to not speak because I don’t have to learn lines. But more difficult because I have to show what I’m thinking and feeling through my facial expressions and actions and behind my eyes. I have to make the audience understand what I’m thinking and feeling just visually. So when I’m acting I usually just try to feel the things Jake feels so that I can show that to the audience and they can understand me.

AL: What’s has it been like working with Kiefer Sutherland?
DM: In one word, it’s Awesome! I really love working with Kiefer. I feel so fortunate to be working with someone who’s had so much experience in film and in television and who also started acting when he was young. I knew from the first time I met him, that he was someone who I could learn so much from. Kiefer is a very hard worker and he’s very smart too. He can tell what works and doesn’t and he is very natural. I am lucky because he’s always been willing to teach me things and he’s been patient and kind. In that way he’s a lot like a father to me because he really leads me to learn the lessons I have needed to learn on the set, not just about acting but about how conscientious he is and prepared before he gets there. He’s also encouraged me musically because he’s a musician and knows so much about that. He actually bought me my first guitar for my 11th birthday. Even though our show and our characters are serious and intense, he’s always cracking a joke right before we start so he’s always made me feel very comfortable. The other thing that is special about working with Kiefer on “Touch” is that he’s not just the lead but also an Executive Producer. I’ve learned a lot about what it looks like to have the responsibility of those two jobs together. I have a lot of respect for Kiefer and working with him has been a fantastic experience for me.

AL: What has been your favorite part thus far about working on the show?
DM: That’s an easy question! I love the crew, the other cast members and my Studio Teacher. Everyone I have been working with from the Directors and assistant directors, writers, producers to wardrobe and make up to sound and lighting, props and of course my teacher who I spend all day with have been so much fun. Everyone is really good at what they do. I am lucky because I have been able to learn about each person’s job and how each job is important to what the show ends up looking like. Because I do the voice over’s, I’ve also learned about that with the people responsible for post production. It’s all so interesting and we have all become like a family. I really do love coming to work every day so I can say hi to everyone. You get to know people pretty well when you spend that much time with them. I feel like if they aren’t really good and happy about being there it could be very different and not something you look forward to. We’ve celebrated birthdays and holidays and have private jokes and handshakes. For me all those new relationships and learning from them have been the best part of my job.

AL: Do you have any other projects coming out that we can be watching for?
DM: I did a horror film that is in some film festivals right now but that was over the summer between Season 1 and 2. There is also another film in the works that doesn’t have a start date yet. I haven’t had a lot of time to do anything else because of the commitment I have to “Touch”. I have been auditioning for some things that I can’t talk about right now and some things are possibilities that I’m hoping will work out if the timing is right. I love working and hope that I just keep getting to do interesting roles like this one.