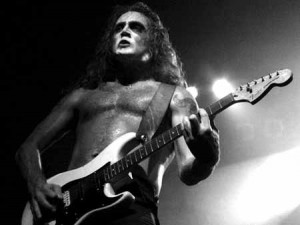 Morgan Steinmeyer Hakansson is the guitarist/ founding member of the legendary black metal group Marduk. The band is set to release it’s 12th studio album titled “Serpent Sermon” in early June of this year. Media Mikes had a chance to talk with Morgan about the bands history and what we can expect from the group’s latest offering.

Adam Lawton: Can you give us a brief history of the band?
Morgan Steinmeyer Hakansson: It can be tough to sum up a 22 year career. We started in 1990 wanting to push the limits of what was being done at that time. We have our 12th studio album coming out this month to add to the other albums and DVD’s we have put out. We have been spreading our message across most parts of the world for quite some time now. We just keep marching all over.

AL: Did you ever envision a 20+ year career with the band?
MSH: The same time we started the band we were expanding and getting more into what we were doing. Things around us were also expanding. We were pushing the limits of what had been done previously and while doing so we realized there were no limits. We just kept going with making our visions come to life. Over time we started to see things in a broader way. That kept us going.

AL: Other than the bands lineup changes. Have you noticed any other changes in the band?
MSH: Not really. Music has always been written in a variety of different ways. Nothing comes to you the same way as another. Sometimes we can base a whole album of a single title. We go where things take us.

AL: How would you describe the band’s new album “Serpent Sermon”?
MSH: I think it is a very good reflection of the band in 2012. This album has everything an extreme heavy metal album should have. The last few albums we have done have been very focused around the themes of death and decay. This album is a return to the diabolical decent of what black metal really is about. This album is I think maybe more focused on that than the previous 2 release. I think the title really speaks for the whole album. We really had a vision behind this album and want people to know the meaning of the album’s title.

AL: Are there video plans for any of the albums tracks?
MSH: We just finished a shoot for the track “Souls of Belial”. I think it will start airing the beginning of May. We have a few things left to finalize but I think this video is a good reflection of the spirit of the song.

AL: What are the exact release plans for the album?
MSH: I think it is coming out in Europe around the 29th or 30th of May and in the States during the first week of June. There is about a week difference between the release dates across the world.

AL: What are the tour plans for the album?
MSH: We are still on the process of finalizing everything. There will be a lot of dates being announced shortly. The plan is to start around May 11th. The tour is going to take us to places like Russia and Siberia. From there we will hit Puerto Rico, the United States and Canada before returning to Europe at the end of June. We have some festival dates in the works as well as a headlining European tour. The headlining tour will be around 40 dates. It’s going to be intense!