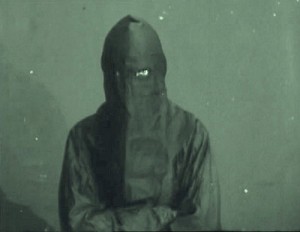 Makinov is the director, writer, producer, cinematographer and editor on the new film “Come Out and Play”. The film is about a couple that find terror on an island inhabited by a community of killer children. Makinov always wears a mask and his identity is not known but that doesn’t change anything, this film is a must-see for sure. I can’t wait to see what he has planned next. Media Mikes had the chance to ask him a few questions about the film.

Mike Gencarelli: With this being your reported first directorial debut, what was your biggest challenge?
Makinov: This is not my first film. Is the first film I shoot with actors and that was part of the challenge. Also some people didn’t trust a face they couldn’t see, but I don’t think directors are completely trusted even if they show their faces.

MG: Where was the film shot?
Makinov: The film was shot in the Holbox Island in Mexico. It’s usually a beautiful place, but there was a storm during most of our shoot. We lost communication with the mainland for two weeks, it was like if the end of the world had happened.

MG: Were you ever concerned with showing the extreme violence towards kids?
Makinov:  I didn’t think about it. I think more gruesome violence towards children has been systematized and assimilated into western culture. Family is a violent institution, schools are violent, institutions of oppression and normalizing, preparing children to be unfulfilled, unhappy adults. Passing down to the next generation values that have been proved wrong, that will only lead to death and misery.

MG: Tell us about the score/music in the film, which I felt was very effective in setting the film’s tone.
Makinov:  It’s synthesizer and drum machine music. I composed it as I was editing. I drew inspiration from obscure Mexican band called Tuareg Geeks.

MG: What do you have planned next?
Makinov:  I am not sure, I am living in the wild with animals and they have inspired me a lot, and there is a sad resonance among the animal kingdom that lives at the mercy of humans. That is an interesting subject to me.