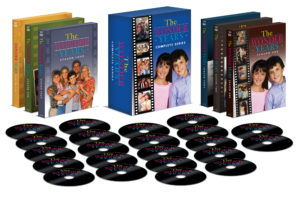 In preparation for the upcoming “The Wonder Years: The Complete Series” DVD box set re-issue on August 23rd Media Mikes and Time Life would like to give fans of the show a chance to win a copy of the series for their very own. Please leave us a comment below or email us your favorite memory from the show. This give away will remain open until Wednesday, August 31st at 5pm, Eastern Time. One entry per-person, per household. All other entries will be considered invalid. Media Mikes will randomly select a winner and notify them via email.

“THE WONDER YEARS: THE COMPLETE SERIES”

For six seasons, The Wonder Years captured the angst of growing up in suburban middle-class America in the late ’60s, as seen through the life and times of Kevin Arnold (Fred Savage).
Audiences eagerly followed his evolution as a typical awkward teenager who remembered every moment of his transition from childhood with excruciating detail and remarkable hindsight. From his first kiss with Winnie Cooper (Danica McKellar) to his friendship with Paul Pfeiffer (Josh Saviano) and the ups and downs of the Arnold family, fans shared in laughter, love, and loss, but above all, wonder.

This 22-DVD set contains all 115 episodes from the six seasons of this landmark series that aired from 1988 to 1993. Included in this specially-priced slipcase set are complete show notes with episode synopses, cast member reflections, “Current Events,” and more plus nearly 12 hours of bonus material, as well as an astounding soundtrack of over 300 classic period songs as they were featured in the original broadcasts featuring such artists as: Jimi Hendrix, Bob Dylan, Joni Mitchell, The Byrds, Simon & Garfunkel, Aretha Franklin, James Taylor, and of course, Joe Cocker’s unforgettable theme.

ABOUT THE WONDER YEARS
The Wonder Years debuted in 1988 following ABC’s broadcast of Super Bowl XXII, and the affectionate look at growing up in the late ‘60s and early ‘70s in suburban America was unlike anything else on television. It was 1968 — the year of Nixon, space walks, Mod Squad, and Vietnam. Enter Kevin Arnold, a sixth grader at Kennedy Junior High School. Set against the suburban backdrop of Anytown, USA, Kevin sought to minimize his teenage angst while dealing with an older, noogie-happy brother Wayne (Jason Hervey), a rebellious sister, Karen (Olivia d’Abo), distant, workaholic father, Jack (Dan Lauria) and doting housewife mother, Norma (Alley Mills). Add to the mix Paul Pfeiffer (Josh Saviano), his nerdy, allergy-riddled best friend, a potential love interest in winsome girl-next-door Winnie Cooper (Danica McKellar) and narration by an older, wiser, wittier Kevin (voiced by Daniel Stern) to add perspective to the nostalgia, and you have the perfect recipe for TV greatness.

The contest is now closed and the winner has been emailed. 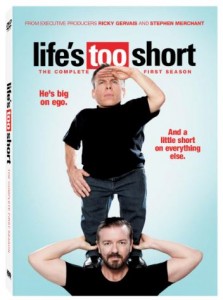 If you are fans of Ricky Gervais and Stephen Merchant, the comedy duo behind BBC series’ “The Office” and “Extras” and “The Ricky Gervais Show”, then “Life’s Too Short” is definitely for you! The series stars Warwick Davis (“Star Wars: Return of the Jedi” and “Harry Potter” franchise) playing a fictionalized character of himself.  I love the fact that he is able to poke fun at himself and in a very tongue-in-cheek style. Ricky Gervais and Stephen Merchant also pop in from time to time through the episodes for a good laugh. The show is also ace with cameo celebrity appearances like Liam Neeson (my favorite) and Johnny Depp They appear completely out of their typical context and will leave you on the floor laughing! Can’t wait for season two! Bring it on HBO!

Official Synopsis: Shot faux-documentary style, Life’s Too Short gleefully charts Davis’s every move as he tries to jumpstart his waning career by opening his doors to a reality TV film crew while trying to maintain his pride and self-respect in a series of uncomfortable, often-humiliating situations. Along the way, he seeks advice from his old pals Gervais and Merchant (playing versions of themselves) in hopes that their A-list celebrity connections including Johnny Depp, Liam Neeson, Sting, Helena Bonham Carter, Steve Carell, Cat Deely (who all cameo) will aid his career.

The DVD is jam-packed with bonus features. To start there is a short featurette (get it short?), well not that short called “Making of Life’s Too Short”.  There are ten behind-the-scenes clips from the series.  There are also various deleted scenes and outtakes.  I feel the series works the way it did but I welcome the extra footage, as parts of it were indeed hilarious.  Lastly, there are previews for each episode.  Did I mention that I love Liam Neeson’s episode? I am surprised that HBO is not giving this series a Blu-ray release since in the UK it is getting one.