An academic awards dinner serves as a turning point for multiple families when a hit and run accident leaves one of its wait staff dead in Marc Meyers’s Human Capital. The film boasts a solid cast lead by Liev Schreiber, Peter Sarsgaard and Marisa Tomei but its rigid structuring choices throw the film off balance as it delves ever deeper into the melodramatic. The resolution to its mystery proves murky and is not quite given enough space to breathe before the film’s conclusion.

Director Meyers and screenwriter Oren Moverman (adapting a novel by Stephen Amidon) split the film up in such a way that the pivotal day of the dinner leading up to the murder is shown through the lens of three characters played by Liev Schreiber, Marisa Tomei and Maya Hawke. It’s the multi-POV strategy we’ve seen with films such as Crash, but on a smaller scale. The trouble with these rigid thirds is that while they all are sort of negotiating with varying degrees of class inequality and value in humanity over money, they don’t quite convalesce in a meaningful way. Largely they depend on leaden dialogue to hit you over the head with each character arc’s Central Theme before we shift to the next one.

Unfortunately I found the first arc, that of Schreiber’s Drew, to be the most compelling of the three stories. His character figures largest into the characters who felt most genuine–his daughter Shannon (Hawke) and his pregnant wife Ronnie (Betty Gabriel, “Get Out”). Schreiber is also easily relatable as a man woefully out of his depth when trying to make a big deal with Sarsgaard’s slimy hedge fund manager Quint. While the film is in no way interested in clarifying the economics at play, Schreiber’s everyman persona makes up for it in his desperate reactions. I felt more interested in the fallout of his bad decisions than I did in getting to crux of the car accident plot.

Beyond Schreiber the film severely underserves the remainder of the cast. I found little to care about in Tomei and Sarsgaard’s relationship. They’re constantly sniping at each other and no doubt trying to hammer home that money can’t buy happiness. Tomei is eventually driven into the arms of a colleague played by Paul Sparks. Usually Sparks is a welcome addition but here it feels like he’s retreading the role he had during his tenure on “House of Cards.” Meanwhile, Aasif Mandvi is a sneering Wall Street bro sidekick to Sarsgaard and feels straight out of an 80’s movie. Eventually the film turns itself over to exciting newcomers Hawke and Alex Wolff (“Hereditary”) but again, their romance and how it all ties into the central mystery drags and feels like it’s trying to throw even more big social themes into the mix in the rush to the finish. 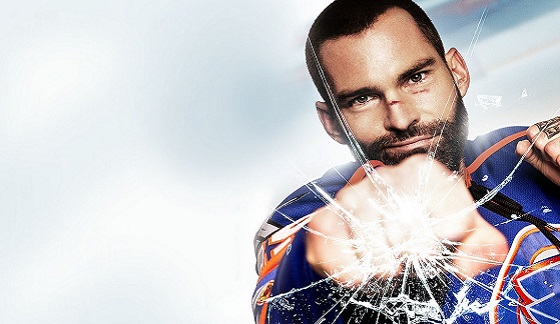 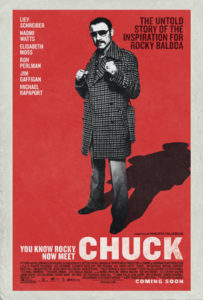 A couple of weeks ago I came across a scrapbook I put together when I was 14 and living in Cleveland. The big news, apparently, was the opening of the Coliseum in Richfield, Ohio. Elton John was there. Many windows were broken when a riot broke out during Led Zeppelin. And, on March 24, 1975, little-known club fighter Chuck Wepner fought the great Muhammad Ali for the Heavyweight Championship of the World.

“Who cared about me a month ago? Nobody!”

This quote, from the film “Rocky,” opens the new film about Chuck Wepner (Schreiber, absolutely losing himself in the role). Known as the “Bayonne Bleeder,” a nickname the New Jersey native dislikes, Wepner is popular in the ring because he can take a punch. He is so popular that he has been told her will receive a shot at the title once Champion George Foreman defeats Ali in Zaire at the famed “Rumble in the Jungle.” Ali won his belt back in Africa but he decides to give a “white” guy a shot at the title. And that white guy is Chuck Wepner.

If you’ve ever seen Chuck Wepner on a talk show, you know the man is always “on.” Here he is no different. Schreiber plays him with a confidence that’s off the charts. Yet he still manages to exude the sadness inside, which Wepner feels whenever his wife (Moss) or others are disappointed by him. Things begin to look up after the film “Rocky” is released, with Wepner being hailed by the press as “the real Rocky.” He begins to associate himself so much with the film that, the night after “Rocky” took home the Academy Award for Best Picture, he is telling people that “We” won the Oscar. However, things begin to slowly unravel, both in his marriage and his life, giving Wepner one more fight to win.

As mentioned above, Schreiber is outstanding as the title character, but he also has a great supporting cast, including Ron Perlman as trainer Al Braverman, Michael Rappaport as his brother, John, and Pooch Hall as Ali. Wepner even has some interaction with Sylvester Stallone himself, played by Morgan Spector, auditioning for a role in “Rocky II.”

As a final note, I’ll add that Stallone has never said he based Rocky on Wepner. He has said that he saw the Ali/Wepner fight and alluded to it when “Rocky” was released. However, as he continued to make more Rocky films, he distanced himself from the Wepner-inspired story. In 2003, Wepner sued Stallone for basically using his story for financial gain. The case was settled in 2006.