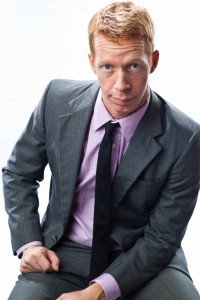 Jody Thompson is the star in Barry Levinson’s new found-footage horror/thriller “The Bay”, which is being released on November 2nd.  Jody also co-stars this Fall with Bette Midler and Billy Crystal in Parental Guidance”. Jody took out sometime to chat with Media Mikes about his roles and what we can expect from the films.

Mike Gencarelli: Tell us about your character in the film “The Bay”?
Jody Thompson: I play Officer Paul. I liken him to the Barney Fife of the town. It takes place in this really small town and which experiences an ecological outbreak, with these creatures all isopods. These are actually real creatures. These creatures get inside the townspeople and start eating them from the inside out. So if you can imagine Barney Fife with bodies flying through the street, then you have my character.

MG: How was it working with such a critically acclaimed director like Barry Levinson?
JT: It was really the drawing force for me to work on this picture. A chance like that doesn’t come by pretty often, so I was really pumped. Honestly, I put the audition on tape, forgot about it but when I got the call back I was psyched since he is such a well-respected director. It was a great project to be involved with.

MG: Tell us about your story line in the film?
JT: There are about four/five different story line and mine is one of the story lines they follow. It was challenging but the way the film is it works. My story has a bit of an arc but let’s just say it doesn’t end well for my partner and I. Just to be able to grab on to something like that I feel like I was able to work with this role a bit. So I thought it was really great.

MG: How was it working with Kristen Connolly, whom I loved in “Cabin in the Woods”?
JT: I did not. It sucks. I worked with Christopher Denham though and he recently had a really big part in “Argo”. So it was cool to work with him on this.

MG: The found footage genre is very hot right now, how does this film stand out from the rest?
JT: I always thought it was a little hokey in the found footage films, when someone is in the house but they keep the camera running. I would be outta there. The cool thing about this is that it is about an outbreak that happens in one day and it takes footage from all different sources. There is Skype cameras, (in my case) there is police cameras, iPhone and many others. They weave all these media forces together to tell a pretty convincing story. If you didn’t know this was a film, there is some believablility to this.

MG: How worked in both film and TV, what do you enjoy most and what do you look for in a role?
JT: My forte is comedy and I consider myself a character actor. Any chance I get to make people laugh is what I love the most. It doesn’t hurt when certain actors, directors or locations come into play. This is the stuff that I look for when I am choosing a role.

MG: How was it getting to work with Bette Midler and Billy Crystal on “Parental Guidance”?
JT: I only got to see Bette during the table read. But working with Billy Crystal was really crazy. I started talking with him one day about hosting the Academy Awards and telling him that he has been the best of all-time. He then started doing all the bits. It was awesome. It was like a free show. At the time I was shooting, Eddie Murphy was slated to host the Academy Awards. I finished shooting and like a week later Eddie dropped out and Billy Crystal got invited back. I thought that was really cool and I was saying that I was responsible for this [laughs]. But he was really awesome and I consider him a comedy legend.