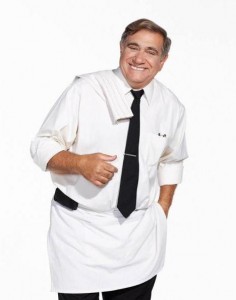 Dan Lauria is best known for playing the father, Jack, on “The Wonder Years”.  He is also a stage play veteran, which is how he got involved with the new show on TBS called “Sullivan & Son”, which is executive produced by Vince Vaughn and Peter Billingsley.  Dan is playing the lead role of Jack Sullivan on the show.  Media Mikes had a chance to chat with Dan about the show and what we can expect from the first season.

Mike Gencarelli: How did you get involved with the show “Sullivan & Son”?
Dan Lauria: Last year, I was doing “Lombardi” on Broadway.  Vince Vaugh and Peter Billingsly came to see the show. They are the producers of “Sullivan & Son”. So they actually offered me another role but I didn’t think I was right for it. He respected that but then called back two days later and asked me to play Sullivan for twice the money. My agent actually said “Yes” before calling me and said “If you don’t take it I’ll kill ya!” [laughs].

MG: So Dan tell me the truth were you only interested “Sullivan & Son” to play a character named Jack again?
DL: [laughs] Yeah another father named Jack. Unlike “The Wonder Years”, this father laughs all the time. Thank God, because I can’t keep a straight face with these guys on the show. There is no way to keep it serious on this show. You can walk it with tears in your eyes saying your dog just got run over and there will be 10 minutes of dead dog jokes till you are laughing.

MG: Give us a little background on Jack Sullivan?
DL: The whole show is based on Steve Bryne’s humor. He is half Irish and half Korean. So Jodi Long and I play his parents. I am like the lovable guy, definitely not like “The Wonder Years”. Jodi, well she is the bar Nazi [laughs]. Jodi is so unlike the character she is playing. She’ll come up with the most clueless lines and Steve will just burst out laughing. You want that in a show. You want everyone loose.

MG: After being on “The Wonder Years” for many years, how it returning to a starring role on TV again?
DL: This is a much easier job than “The Wonder Years”. This is four cameras and live in front of an audience. The schedule is pretty much the same every week. Unlike “The Wonder Years”, it was not only long hours but whenever you saw a close up of me or Alley Mills talking to the kids…they weren’t there. They were at school. We were talking to X’s on a chair. So this job, I feel like I am robbing the bank. I feel like I feel asleep next to a slot machine.

MG: Having such a theater background, you must love that it is shot in from of a live audience?
DL: For me it much easier especially since I am stage veteran. I have done a lot of plays and I love a live audience. For me the best audience is the first day we block it for the cameras. They crew guys have been around for a long time and when you can make them laugh, you know you got something. I am trying to be neutral about it and trying to have that actors attitude of never want to get too high or too low. But boy, the way the crew has been reacting, it is hard for me not to have high expectations.

MG: Why do you think will draw viewers into this new comedy?
DL: Our showrunner is Rob Long, who was with “Cheers” forever. Our show is “Cheers” meets “Archie Bunker’s Place”. We are more blue collar. I think we are going to connect with audiences because everyone has a bar like this in their neighborhood. It is the old corner bar that is going through the change since it was all Irish and now mixed. We got Brian Doyle-Murray, who is great as the old bigot. Then we have Christine Ebersole, who is a two-time Tony award winner. They we have they young stand-up’s like Roy Wood, Ahmed Ahmed and Owen Benjamin. They are just terrifc. Christine plays Owen’s mom. In one episode, they try and do a mother-son lounge act. They do all these sexy songs and it is the most perverted show I’ve ever seen [laughs]. It is absolutely hysterical.