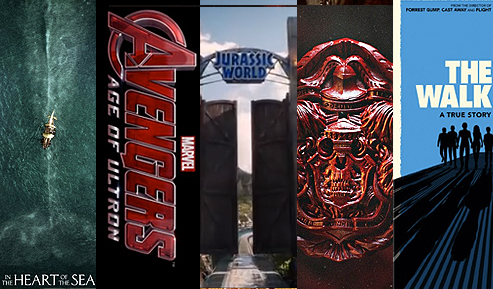 Last week I listed off my top five films of 2014, it was an admittedly quiet year for me movie-wise but 2015 looks to be an embarrassment of riches.

My top Five Films Coming in 2015. In order of release:

March 13: In the Heart of the Sea
Director: Ron Howard
Cast: Chris Hemsworth, Brendan Gleeson, Cillian Murphy, Ben Whishaw
Ron Howard’s take on Nathaniel Philabrick’s telling of the Tragedy of the Whale Ship Essex–aka the terrifying true story that inspired Moby Dick.  The trailer, featuring copious digital sperm whales, is nerve-wracking and in the hands of Howard, once again directing his Rush star, Chris Hemsworth, I can’t wait to see this on the biggest screen possible.

May 1st: Avengers: Age of Ultron
Director: Joss Whedon
Cast: Robert Downey Jr., Chris Evans, Chris Hemsworth, Scarlett Johansson, Jeremy Renner, Mark Ruffalo, James Spader
In the wake of The Winter Soldier and the outer space developments of Guardians of the Galaxy, where exactly does that place the Avengers team? By the looks of the trailer we got in October, possibly thrown into disarray by one of their very own Tony Stark’s inventions. Go figure. It’s almost disconcerting how well James Spader’s voice translates into sinister robot Ultron.

The first Jurassic Park is my favorite film of all time but while Lost World boasted a great cast (more Goldblum!), somewhere around the t-rex rampaging through LA the sequels began to lose their sparkle. The third brought the franchise into mindless action territory and the less said about it, the better. It’s therefore with such relief that the trailer—focusing on the theme park concept of the first film coming to fruition looks to be a fresh take on the concept. Plus Chris Pratt. On a motorcycle. Surrounded by a gang of velociraptors. That is all.

Robert Zemeckis directs the true story of Philippe Petit—the only person to traverse the gap between the Twin Towers on tight wire. It’s a story that’s already been covered on screen by the highly acclaimed documentary Man On Wire, but the vertigo-inducing trailer of this dramatization has me intrigued.

October 16th: Crimson Peak
Director: Guillermo Del Toro
Cast: Tom Hiddleston, Jessica Chastain, Mia Wasikowska, Charlie Hunnam, Doug Jones
Before Del Toro “cancelled the apocalypse” in the super fun Pacific Rim, he broke into Hollywood with amazingly atmospheric smaller films like Pan’s Labyrinth and The Orphanage. Crimson Peak looks to be a return to that, his first horror film in English. Mia Wasikowska is a young woman who is attracted to a “mysterious outsider” (Tom Hiddleston) and brought to his family home which is evidently alive. Del Toro regular Doug Jones on the cast list surely means we’ll be getting some cool ghosts and creatures in the home too. Described as a gothic romance, the images of the film that have been released are visually stunning and if Hiddleston is in sinister mode, count me in. This is definitely the film I’m most excited for in 2015.

Honorable Mentions: Steven Spielberg‘s rejoining Tom Hanks in an as-yet untitled Cold War Thriller, The Hunger Games wraps up, plus there’s a couple slightly known franchises called James Bond (Spectre) and Star Wars that might interest some filmgoers like me coming back to big screens in 2015… 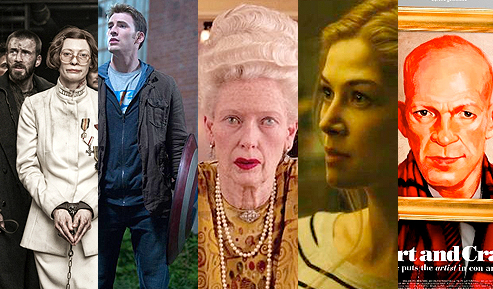 It’s always tough being a movie buff in awards season. We sift through the weird mess of movies released between the busy summer season and Halloween and then suddenly are bombarded by all the critical darlings our eyeballs can handle in the peak holiday season. As such, I’m not completely caught up for Oscar but I can share my personal favorites from last year. As it happens the majority can be summed up with this simple questionnaire–Did it feature Tilda Swinton*? Did it feature Chris Evans? Did it feature Tilda Swinton AND Chris Evans? There, you’re spoiled for my top three but you can still read my thoughts below:

Honorable mentions: The Imitation Game, Birdman, Guardians of the Galaxy, X-Men Days of Future Past and Frank.

(*Note: Swinton’s other 2014 film, Only Lovers Left Alive got its theatrical release this year, but I covered it in my best of 2013 roundup–so my opening criteria still stands!)

Not writing the majority of the film reviews for this site, I have the great good fortune to generally avoid the stinkers, which is why I can’t in good faith turn in an accurate WORST list, so instead the next list from me will be a look forward to this year’s most exciting releases to come.