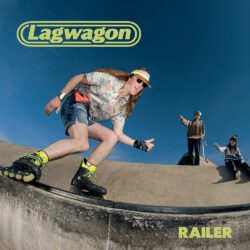 Punk veterans Lagwagon return with a brand new studio album simply titled “Railer”. The 12 track releases which is being released via Fat Wreck Chords as was produced by Cameron Webb is the follow up to the bands 2014 release “Hang” which marked the bands return to the studio after a nine year lapse.

With nearly thirty years of being a band under their belts the members of Lagwagon which consist of vocalist Joey Cape, guitarists Chris Flippin and Chris Rest, bassist Joe Raposo and drummer Dave Raun could have easily sat back and phoned it on their latest release as they certainly have earned it. Instead the band which has been churning out albums since 1992 pulled out a shred-tastic in your face punk album that is equally fresh as it is familiar. Tracks like “Surviving California”, “Dangerous Animals” and “Bubble” showcase some impressive guitar work set against an extremely tight rhythm performance which serves as a near perfect stage for Capes signature vocals. Other notable tracks include the piano tinged “The Suffering” and “Pray For Them” and the bands take on Journey’s “Faithfully” which is the first cover to appear not as bonus material since the band included their version of the Agent Orange song “Everything Turns Gray” on 1998’s “Let’s Talk About Feelings”.

Clocking in at just less than forty minutes I was blown away with how much musicality Lagwagon packed in to this record. Listeners were given just a taste of the bands heavier side with previous releases but “Railer” rips the band-aid off as the band just goes for it. Despite the rather short run time I found myself listening to it from start to finish multiple times as there is just so much to take in and enjoy. Both long time listeners and newer fans will surely want to check out this release as it shows that just because a band has been around awhile it doesn’t have to become complacent and that music can always be taken and explored further no matter how many albums you have released prior or how many years you have been together. 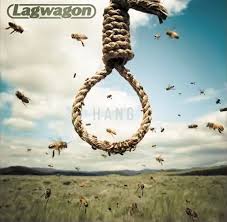 Fans of 90’s punk rock darlings Lagwagon can all rejoice as the band is back with their first new album in 9 years. Simply titled “Hang” the album features 12 brand new tracks from lead vocalist Joey Cape and company and capitalizes on the bands signature punk sound while blending in elements of rock and heavy metal giving each track and edgy in your face punch.

With 9 years since the release of Lagwagon’s last album “Resolve” I wasn’t quite sure what to expect from the band dominated my car stereo during my early college years. Well it’s safe to say I was not let down. Everything that first drew me to the band was present along with some newly added bells and whistles. Tracks like “Reign” and “Burning Out in Style” are classic Joey Cape numbers reminiscent of the bands earlier songs found on albums like “Hoss” and “Double Plaidinum” while tracks like “The Cog in the Machine” and “Western Settlements” have a much harder feel which was something that I really enjoyed.

From start to finish “Hang” runs the gambit of musical styling. From full on punk rock to acoustic tinged ballads there is something for everyone on this album. Musical variety and catchy, heartfelt lyrics make this a great listen.