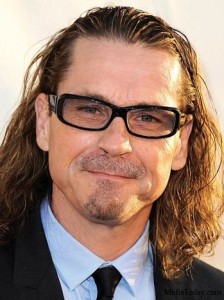 Kurt Sutter is the creator/writer and director of the hit FX series “Sons of Anarchy”. Now in its 5th season the series is showing no signs of slowing down. Media Mikes had the privilege to speak with Kurt recently about the death of main characters and what he looks for when casting roles on the show.

Adam Lawton: When a main character like Opie is killed or is going to be killed off the show does the actor or actress know ahead of time prior to getting the script?
Kurt Sutter: I like to let my actors know what’s going on. I don’t like to just hand them a script and let them read it for themselves. With Ryan Hurst who plays Opie we sat down and talked about how things were going to play out and how it all fit in to his characters story arc. Opie has been a character on the show since day 1 so I had to make sure everything leading up to and after his death was going to have the right flow. Though I wasn’t on set the day the scene was shot I know it was very emotional. Ryan had asked for everyone to be there so he could say good bye. This cast has a really solid bond with each other so this was the important for him to do that. When you see Opie looking at Jax through the window before he is killed he is in a sense saying goodbye to everyone.

AL: How did you go about choosing the Opie character as the one to die?
KS: From when we first see Opie in season one getting out of prison we notice his struggles to fit in. Not only is he trying to fit in with the club but he also is trying to do right by his family. After his wife is killed accidentally during a hit ordered by Clay is when you really start to see his decent. That arc was furthered by the death of Opie’s father Piney last season. Once Opie found out about all that went on and that Jax’s knew about it and didn’t tell him was when Opie was really tested. That family has endured so much that ultimately Opie chooses to stand up for the club and Jax by putting himself in the position to be the one to die per Pope’s request. Jax didn’t choose who was going to die and he probably never would. This was Opie’s way of doing right by everyone. Though that story arc comes to an end the lines between Jax and Pope are just beginning.

AL: Can you give us a little background on your use of brutality in this killing and a couple of others in the show?
KS: When I bring in an episode there are almost always some things that need to be cut out. The world we are showing is a brutal world where brutal things happen. In order for the stories to be told correctly a certain amount of those elements have to be present. The episode where Clay cuts a clowns scrotum off is a perfect example. During the shooting of that scene there was a shot that showed the scrotum lying on the floor as I felt it really sent a message. Did that make it in to the show? Obviously not, as it went too far. We had to cut that episode down to make the scene work while still including that brutal element. This was also the case with the killing of Opie. Sure I could have had Jax looking into the back of Opies caved in skull but I think that would have been too much and ultimately it was more dramatic the way you saw that scene. It’s funny because I actually have a sticker on my mirror now that says “You cannot show the clown scrotum”. (Laughs)

AL: The show has really great casting and each season it seems to get better and better. What do you look for when casting roles on the show?
KS: The first thing is I don’t want them to be dick! That really is the first piece of research I do. I like my set to stay a safe, creative and nurturing environment. I do my homework to ensure I’m not bringing a pre-Madonna into my world. Then it is really about the level of their work. This season with Jimmy Smits and Harold Perrineau they have a tremendous body of work that I am aware of. We try to make interesting casting choices. The obvious choice for the Damon Pope character would have been picking an actor that plays more hard or dangerous. We wanted to break that so we looked for a guy who could sort of compartmentalize that danger and hardness and tuck it into the pocket of his Prada suit. Harold was a wonderful choice for the role as he can go dark and scary but, for the most part there is something warm and almost vulnerable about him. These things make him a very interesting antagonist. As the season progresses you will start to see this weird mentorship type thing happen between Pope and Jax. When you think about it in terms of what Jax wants to do with the club Pope is the perfect guy for that. Pope is a guy who turned all of his dirty business in to very legitimate things. I couldn’t avoid that obvious circumstance. With Jimmy Smits I had the idea for his character but I didn’t know what world he was going to play in. I wanted him to be an outlaw but not another biker. I felt like we had the African-American dynamic with Pope and the Niner’s so I sort of wanted to stay away from that world. We landed in the Latino ethnicity on terms of there are a lot of Latino gangs in the Stockton area. That’s where the roots of that character began. With Jimmy it was one of those instances where I was able to start at the top and get the guy I wanted. This is not always the case. Not that you don’t ultimately end up on a great actor but I have had 2 or 3 circumstances in my career where I thought that this role needs to be this specific person and this was one of those times. The last time I think that happened in terms of guest stars was when Forrest Whitaker appeared on “The Shield”. I remember going in with the idea of getting him but knowing it probably would never happen. It was the same thing with Jimmy when I went to the network with it. We were able to sit down with Jimmy and get him excited about the role and wanting to come in and do it.

AL: You have stated that the season 7 will be the last season of the show. Is this still the case?
KS: I have said that quite a bit and talked in length on the subject. But as the show continues on with season after season budgets inevitably increase. After a certain amount of time there is just not enough left on the bone for the show to be economically viable. The people at FX have been very generous in allowing me to do what I do and I am sure that if I start to think that I can’t wrap up the story in 7 seasons they would probably allow me to make 7 or 8 more episodes to get it done. However looking at my giant story board I think I am going to be able to wrap things up in 7 seasons.