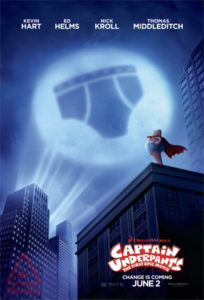 In 2013, 2012, 2005, 2004 and 2002, the “Captain Underpants” books made the American Library Association’s top 10 challenged books. This is a list usually reserved for “Fifty Shades of Grey,” “The Chocolate War,” “Of Mice and Men” and other well-known books. Ironically, “Captain Underpants” place on the list isn’t for its potty humor, but for its insensitivity and because it supposedly encourages children to disobey authority. For fans of the book, or those who don’t see that as a bad thing, you’ll be happy to know the movie keeps that spirit intact.

“Captain Underpants: The First Epic Movie” begins with an introduction to George Beard (Hart) and Harold Hutchins (Middleditch). The two fourth graders love to pull pranks and share a creative disregard for their school principal, Benjamin Krupp (Helms). They’ve rebranded him in their comic book, “Captain Underpants,” as made him the title character. He faces off against foes who are also modeled off of other people at the school like annoying teachers, humorless dorks and evil toilets. But the comic hero comes to life when George uses a 3D hypno ring from a cereal box to escape Krupp’s ire. At the snap of their fingers, the stuffy principal dons the iconic white briefs that stretch above the belly button.

There’s an underlying charm to George and Harold’s antics because of how their friendship is birthed through a mutual love for the arts and immature humor. It’s hard not to root for a duo that pulls pranks after being oppressed for expressing themselves in imaginative and comedic ways. Sure it’s humor that makes a man-child giggle and an elementary school classroom roar with laughter, but it’s counterbalanced by witty subtlety. However, even the most juvenile minds might roll their eyes at some of the low hanging fruit “Captain Underpants” happily plucks.

There is some clever wordplay and sight gags for astute viewers. But the majority of fun is from the student and teacher caricatures populating Jerome Horowitz Elementary. Jordan Peele provides the unsavory voice of a teacher’s pet, Kristen Schaal adds a nasal flair to her trademark high pitch when voicing a bashful lunch lady and Nick Kroll uses a stereotypical German accent to voice the film’s ludicrous villain Professor Poopypants. There’s actually a decent reason why his name is so puerile.

Director David Soren plays with different visual styles and animation throughout to keep the eyes drawn to the screen. While the majority of animation is on par with other animated films, moments with sock puppets and sequences that feel like children’s crayon drawings coming to life add to George and Harold’s unique vision. Soren, however, isn’t able to do much with fight and action sequences in the final act that make it memorable.

The Bob’s Burgers panel, comprised of Loren Bouchard (show creator), Bobby Tisdale (voice of Zeke), Kristen Schaal (voice of Louise), John Roberts (voice of Linda), Larry Murphy (voice of Teddy), Eugene Mirman (voice of Gene), and H. Jon Benjamin (voice of Bob), took the main stage at New York Comic Con this past Thursday, October 9th. Although Dan Mintz (voice of Tina) was not among them, a larger-than-life Tina Belcher, joined the panel, sitting on the side during the discussion.

The audience was shown three clips of the new season. In one, Linda dyes her hair blonde, while in another Bob partakes in a life-drawing class, where he is forced to draw Edith, a character that was seen in the previous “Art Crawl” episode. The last clip had Gene, Tina, and Louise visiting an upscale grocer on a quest to buy black garlic. In addition to these sneak peeks, audience members were also treated to some key news announcements (tracks are being prepared for an upcoming show soundtrack and there will be a Christmas special where viewers will meet Bob’s father for the first time), before the panel continued with a fan Q&A, where many of the questioners came prepared in Bob’s Burger character costumes.

One fan asked, “As actors and performers who have very unique voices, how do you bring subtlety to your characters?” Kristen Schaal remarked, “Definitely the scenes. I took a college course on subtlety and it cost me $500,000. Totally worth it.” Loren Bouchard also shared some anecdotes with fans, saying that in his original meeting with the Fox network, he pitched the show as a “Family that runs a restaurant, and they’re cannibals,” believing that he needed to make the show edgy in some way-to which the Fox executive replied, “What if they’re not cannibals?”

The Emmy-awarded Bob’s Burgers entered its 5th season on October 5, 2014, and judging from the response at this year’s New York Comic Con, fans can’t wait to see what happens next.