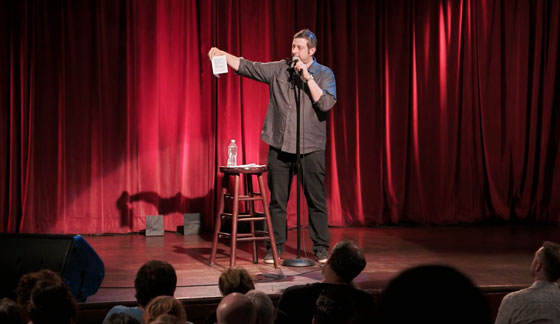 The Bob’s Burgers panel, comprised of Loren Bouchard (show creator), Bobby Tisdale (voice of Zeke), Kristen Schaal (voice of Louise), John Roberts (voice of Linda), Larry Murphy (voice of Teddy), Eugene Mirman (voice of Gene), and H. Jon Benjamin (voice of Bob), took the main stage at New York Comic Con this past Thursday, October 9th. Although Dan Mintz (voice of Tina) was not among them, a larger-than-life Tina Belcher, joined the panel, sitting on the side during the discussion.

The audience was shown three clips of the new season. In one, Linda dyes her hair blonde, while in another Bob partakes in a life-drawing class, where he is forced to draw Edith, a character that was seen in the previous “Art Crawl” episode. The last clip had Gene, Tina, and Louise visiting an upscale grocer on a quest to buy black garlic. In addition to these sneak peeks, audience members were also treated to some key news announcements (tracks are being prepared for an upcoming show soundtrack and there will be a Christmas special where viewers will meet Bob’s father for the first time), before the panel continued with a fan Q&A, where many of the questioners came prepared in Bob’s Burger character costumes.

One fan asked, “As actors and performers who have very unique voices, how do you bring subtlety to your characters?” Kristen Schaal remarked, “Definitely the scenes. I took a college course on subtlety and it cost me $500,000. Totally worth it.” Loren Bouchard also shared some anecdotes with fans, saying that in his original meeting with the Fox network, he pitched the show as a “Family that runs a restaurant, and they’re cannibals,” believing that he needed to make the show edgy in some way-to which the Fox executive replied, “What if they’re not cannibals?”

The Emmy-awarded Bob’s Burgers entered its 5th season on October 5, 2014, and judging from the response at this year’s New York Comic Con, fans can’t wait to see what happens next.