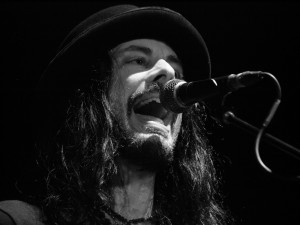 Richie Kotzen is a singer/guitarist who along with an impressive solo career has played with bands such as Poison and Mr. Big. Kotzens newest endeavor is the trio known as The Winery Dogs which along with Kotzen consists of Billy Sheehan on bass and former Dream Theater drummer Mike Portnoy. Together the trio is set to release their debut album titled “The Winery Dogs” and Media Mikes had the chance recently to talk with Richie about the album and the group’s formation.

Adam Lawton: Can you tell us about the formation of the Winery Dogs?
Richie Kotzen: I had gotten a phone call from Eddie Trunk who I have been friends with for a few years now. He called to tell me that Mike Portnoy and Billy Sheehan were looking to start a power trio and that he mentioned my name. The guys were in to it so we got together and did some jamming. From jamming together we came up with ideas that would turn into songs that appear on the record.

AL: What was that first jam session like for everyone?
RK: I have known Billy for 20 years now so it was familiar territory with him. Mike and I hit it off right away when we met and we just started jamming in my studio. We started playing and creating these ideas that I recorded. From there we went our separate ways for awhile. I went back and listened to what we had done and sang on a couple and added a few other things. I sent them off to the guys to listen to and they liked them so we decided to see things through. We did this a few times and that developed into an album.

AL: What is your take on the power trio?
RK: This has been the standard for me since I started making solo records. For the most part I have always played in that type of format and I am very comfortable playing in that type of scenario.

AL: From a tonal stand point did you try anything different with this recording?
RK: I don’t think so. What your hearing on the record is the collaboration of what we sound like when we are together writing. No one’s identity got lost on this record which is something that I think is really cool. When you listen to it you know who’s who and it’s really great. Yes the record is a collaboration but it still sounds like us as individuals.

AL: The songs on the album are very accessible. Was this done on purpose or did it happen naturally?
RK: That’s kind of my nature being a singer/guitarist. Everything I am involved in revolves around the vocals. When you add the fact I am playing guitar while I’m singing I probably won’t be shredding at the same time. That’s not to say the record doesn’t have shredding elements to it. The crazier lines that you do hear came out of improvisation. A lot of times Billy and Mike would start improvising parts and I would go back and listen to the r ecordings and either double what Billy was doing or something along those lines. When it was all done we had this track that sounded like we spent a lot of time orchestrating it. Things were very much improvised and I like the spirit of that.

AL: Being both a singer and guitarist do you find your approach to songwriting favoring one or the other?
RK: The song always comes down to the vocals. It’s the lyric and the melody. Everything is built from that at least in the style of music I perform. When you strip everything down the melody is the song. Anything else you put in a song can be altered or changed be it by using different chords against the melody or what have you. In the end that melody is what it is.

AL: What are the group’s tour plans for the release?
RK: We are doing our first show in Osaka, Japan. Then we have two shows in Tokyo before heading to South America. After we play Brazil and Chile we will be playing in New York and a few other places on the east coast. After a little break we head over to Europe for about 3 weeks and then were back in the states to hit the west coast.