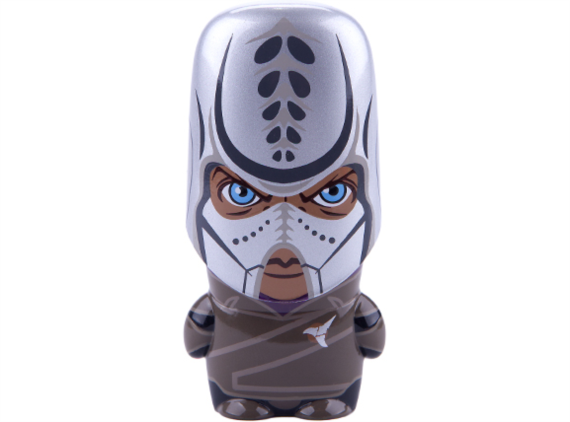 Media Mikes would like to giveaway the following a LIMITED EDITION  Star Trek Klingon Captain Designer USB Flash Drives from Mimco’s “Star Trek” series. If you would like to enter for your chance to win one of these great prizes, please leave us a comment below or send us an email indicating your what “Star Trek” character would you like to see Mimoco make into a MIMOBOT. This giveaway will remain open until February 14th at Noon, Eastern Time. This is open to all fans of Media Mikes, worldwide!! One entry per person, per household. All other entries will be considered invalid. Media Mikes will randomly select winners. Winners will be alerted via email.

Klingon Captain is Mimoco’s first plunge into the universe launched by the major motion pictures Star Trek and Star Trek Into Darkness . As one of the few alien races to show up in every series, it was only a matter of time before the Klingons had a MIMOBOT of their very own. Klingon Captain MIMOBOT comes with a helmet which, when removed, reveals a menacing grimace underneath. Only 1000 Klingon Captain MIMOBOTs are being manufactured, so get your hands on them before Kirk does!

Wow, what an amazing idea! That was what I was thinking when I first saw this book advertised. There are millions are “Star Trek” fans like myself that probably thinking the exact same thing. “A Very Klingon Khristmas” is a very clever and funny story and a must have for any fan of the franchise. This book is quite cheap (around $10) and I see this being a frequent cheap gift for many to give to their friends and family this holiday season.

Official Premise: This hilarious parody firmly plants Klingons at the center of the Christmas story—where they rightly should be—including everything from a Santa equipped with retractable claws, tribbles in the stockings of naughty Klingon boys and girls, and the spirited holiday warmth of a hot cup of mulled blood wine. Illustrated in a classic Norman Rockwell–inspired style, A Very Klingon Khristmas is the perfect holiday gift for every Star Trek fan!

The illustrations in “A Very Klingon Khristmas” are very eye-catching. They are very colorful and have that classic yet retro feel to them. You can tell that the author was a big “Trek” nerd himself since he aims to please all fans of the franchise here. Kudos also go to Gallery Books for delivering a fine release. The hardcover book is well presented and high quality. They could have cheaped out on this book knowing that “Star Trek” hardcore fans anyway but this delivers.