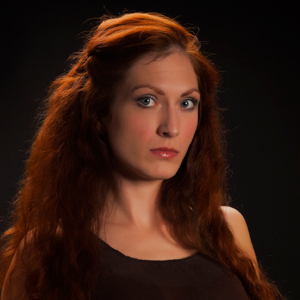 A throwback to ‘80s slasher films like Friday the 13th, Blood Widow tells of a couple, Hugh and Laurie, who after buying a nice house in the country throw a party for their friends. During the wild night a few friends decide to explore the abandoned and decaying boarding school next door, only to wake an emotionally broken killer: The Blood Widow. We speak to one of the film’s stars, Kelly Kilgore.

We asked for you, of the cast, because you have such an interesting, albeit brief, arc in the film. How fun was it playing this role?
I had a blast with Harmony! Playing a supporting character actually allows you a lot of freedom to have fun and make interesting choices, and Jeremy was extremely receptive to his actors’ ideas. Having an innocent character like Harmony in a slasher film is rare, and I loved the way it worked out. After shooting was over, the Arcani guys presented me with Mister Buddha (Harmony’s teddy bear) as a keepsake; he may or may not be sitting on a bookshelf in my living room right now.

I see you do a lot of theatre, and other more – for lack of a better word – ‘thespy’ work. Was doing Blood Widow a chance to let your hair done and do something totally unexpected?
It was. Although Blood Widow is a very scary film, Harmony herself is light and funny. That sort of subtle comedy was a new challenge for me, and I enjoyed it immensely. It was also my first feature, and I learned a lot about how a film set works. It’s quite different than theatre. I made a lot of friends within the cast and crew; Emily and I hang out all the time, I see Jose a lot, and I randomly ran into Derek and Phil the other night at a bar.

What do you find more rewarding – stage work or film work? I imagine they’re both totally different types of experiences.
Theatre and film are hugely different, and I love them both. In my life, at least, they compliment one another, each strengthening skills that improve my work in the other medium. Theatre, especially classical theatre, gives you a solid grounding in technique. Doing the same show night after night really strengthens core acting skills and the ability to perform under all conditions. Film, on the other hand, keeps you honest–you can’t cheat in a closeup! I’m extremely lucky to be doing both.

Are there moments, when working on a horror film like this, that you’ve got to try and prevent yourself from bursting into laughter or accidentally smiling. The ridiculousness of the genre would take great discipline I imagine?
Working on any project, there are moments of hilarity that you have to breathe through and try not to laugh. But that’s what makes it fun! If everyone was actually terrified the whole time, no one would want to make horror films. Harmony was especially funny because she’s extremely spacey. I recall shooting one scene with Jose where I examined his camera … I did my level best to make him laugh, and we both cracked up after “cut” was called every time.

As terrifying as she is, the Blood Widow character is also somewhat of a sad character. What do you think?
I totally agree, and I think that is one thing that Ian and Chad did brilliantly with the script, making Blood Widow stand out in the genre. Even though you don’t want to be anywhere near the Blood Widow, you can understand how she came to be the way she is. You even feel a little sorry for her. I like to think that she and Harmony could have been friends.

For those that enjoy your work in the film, where else can they see you?
If you fancy a trip to Massachusetts, I’ll be playing Lady Percy and Doll Tearsheet in Henry IV, Parts I & II at Shakespeare & Company in August. I’ve also got a couple of other film projects airing this summer: The Aegeans comes out June 16 (of Ulysses fame), and the pilot for Spaceship Florida should be online sometime in mid-July. Links to everything at actor.kellykilgore.com.