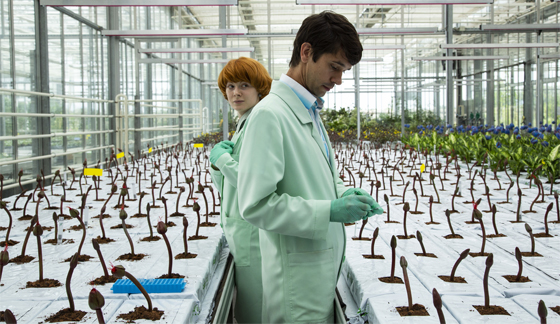 Due to the prominence of Little Shop of Horrors‘ famous “Audrey II” in pop culture, it makes sense that I approached Little Joe–the titular blossom in Jessica Hausner’s new feature, named after its lead’s young son–somewhat warily. After all, naming that unnatural plant after its owner’s closest loved one didn’t quite work out for Seymour, did it? Both the plant and the feature Little Joe are not quite the bombastic spectacle as that man-eater, but they offer a few creepy elements of their own. Part sci-fi, part social commentary and with hints of horror, Hausner’s film is visually arresting but its many thematic seedlings never fully take root.

Alice (Emily Beecham) works in an advanced plant breeding lab, where she has just made a breakthrough in engineering: a plant that is meant to boost its keepers happiness just by breathing in its presence. This antidepressant alternative, which Alice dubs “Little Joe” after her son, sounds promising but Alice’s coworkers remain suspicious. Particularly after the Little Joes causes “his” planted neighbors to wilt. Alice’s only supporter appears to be Chris (Ben Whishaw) who’s anxious for Alice to come out for a drink with him. The first red flag comes in the form of fellow scientist, Bella’s (Kerry Fox) dog running rampant in the lab after encountering the new plant. His owner was already in opposition to Alice’s work and even more so after she becomes adamant that his encounter made the dog “not himself.” Despite this, Alice has a seedling of her own currently potted in the home she sometimes shares with her son (she is divorced), the human Joe.

As you can imagine, suddenly Joe isn’t exactly himself either. The trouble with the film comes in how it never really commits to how malevolent Little Joe is meant to be. In some of those encountered they do gain a sort of vapid air of cheerfulness. In others, their entire personalities take hard turns. Human Joe suddenly does want to move out to live with his father while the lovelorn Chris gets more aggressive in his overtures to Alice. At times it seems to lean into critiquing what exactly is true happiness–if you’re only happy on a drug, does it count and does it matter? At the same time though, Hausner introduces this angle of the plant wanting to multiply via its human hosts and a whole lot of movie pseudo-science. A sort of Invasion of the Bodysnatchers. But it’s an extreme it only really goes to in one tense sequence with Fox’s character trapped in Little Joe’s greenhouse.

If there’s one thing that’s consistent, it’s Hausner’s overall grip on the film’s visual design.  Production designer’s Katharina Woppermann beautiful pastel palette complements Beecham’s overall aloof demeanor well from her sterile labs to her small home. Little Joe’s flower with its vibrant puffs of blood red pollen is also fittingly ominous. Meanwhile Hausner’s camera never quite stays still, even roving slowly through the quietest of conversations to keep viewers just a little on edge throughout. It’s unfortunate however that the visual team’s work is frequently undermined by a jarring score of loud clashing sounds. Again, the score is telling me horror film, but Hausner isn’t giving me enough to support it.

Overall, like a botanical garden, Little Joe is something I admired in a slow meandering sort of way for its beauty and craftsmanship more than any sort of emotional connection.