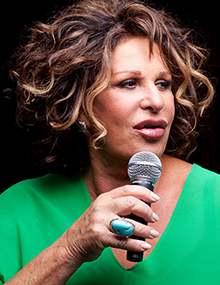 I have no idea what they were serving in the lunch room of Erasmus Hall High School in Brooklyn during the 1950s but whatever it was it had an extra helping of talent. Songwriter Jeff Barry is a graduate of the school, as is actor Bernie Kopell. Barbra Streisand is a member of the class of 1959 while Neil Diamond attended for a couple of years before graduating elsewhere. Had he stayed he would have been a member of the class of 1956. That class also boasts the great Lainie Kazan.

A life member of The Actor’s Studio, she debuted on Broadway in 1961’s “The Happiest Girl In the World.” In 1964 she not only appeared as Vera in the classic musical “Funny Girl” but served as Barbra Streisands understudy. After 18 months of not missing a performance Streisand developed a throat problem and Kazan went on. Almost five decades later she’s still going strong. Best known for her Golden Globe nominated performance in “My Favorite Year” and as Nia Vardalos’ mother in “My Big Fat Greek Wedding,” Kazan has also been seen on such popular television programs as “Desperate Housewives” and “Modern Family. She also reprised her role as Belle Steinberg Carroca in the Broadway musical version of “My Favorite Year,” earning a Tony Award nomination for her work.

While promoting her new film, “Finding Joy,” which opens on Friday, June 7, Ms. Kazan chatted with Media Mikes about her career. Feel free to call her Professor Kazan.

Mike Smith: What can you tell us about Gloria, your character in “Finding Joy?”
Lainie Kazan: Gloria is an ex-stripper. It’s a very quirky film…very out of the box. I play Barry Bostwick’s wife. I’m very inappropriate. I learned that I was based on a real person. I finally got to meet her while we were shooting the film. She’s VERY inappropriate. She’s larger than life. She and her husband just love each other to death. They’re very affectionate. I just fashioned my character accordingly. She’s blonde and buxom….very Jayne Mansfield-y.

MS: Was there anything particular that attracted you to the project?
LK: I liked the script. It’s a very interesting little script. I loved the director (Carlo De Rosa). He’s Italian and he brought along his lighting designer and cinematographer. There was a little Italian contingency! I really enjoyed them…their point of view on the film. And I think Barry Bostwick is fantastic. I enjoyed working with him. And the young people in the film…Josh Cooke and Liane Balaban…I thought they were wonderful. Plus I love Fort Lauderdale, where we filmed. The entire experience was delightful.

MS: Barry Bostwick pretty much said the same thing…it was great to work in Florida and even greater to work with the young talent.
LK: They were wonderful.

MS: You are one of the primary reasons that “My Favorite Year” is probably my favorite comedy.
LK: Thank you.

MS: When I knew we were going to talk I posted the news on Facebook and I can’t tell you how many “My Favorite Year” lines were posted on my page.
LK: That film was one of the most joyous experiences of my life. I had just come from doing “One From the Heart” with Francis Ford Coppola, which was probably one of the hardest but most educational experiences of my acting career. Then I went into this little comedy and…Oh My God, what a joy! I learned that you don’t have to work so hard…it doesn’t have to be painful to have a success. I just loved working with Richard Benjamin (the director of “My Favorite Year”). What a great guy he is…what an eye he had for comedy.

MS: Ten years later you earned a Tony Award nomination when you played Belle Steinberg in the stage musical version of “My Favorite Year.” Was it odd to revisit the role?
LK: It was strange. It was very hard to translate the story from film to stage. Theater is a different medium and it requires a different kind of acting, which I’d never done. I’d gone from a theater project into film but never from film into theater. It was a challenge.

MS: Do you have a preference? Would you rather do a film or television show or do eight shows a week?
LK: I love to sing. I do a lot of concerts. That’s my favorite thing to do. I love theater. I love that you get on stage at the beginning and you end at the end. And that you’ve had a full, rich experience getting there. But I also love the intimacy of film. The camera can get into your soul.

MS: Are you working on anything now?
LK: I have another film coming out on June 18th called “Divorce Invitation.” I’m also going to be singing in Las Vegas at the Smith Center and at Feinstein’s in San Francisco. I’m singing a little here and a little there. I’m also now teaching. I’m a professor at U.C.L.A. I teach acting for the singer. They call me the Professor who’s preserving the Great American Songbook!