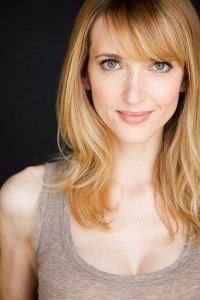 Kathryn Fiore is co-starring in TBS’ new comedy series “The Wedding Band”, playing Ingrid. Kathryn has also appeared in films like “Hatchet II” and the upcoming spoof “30 Nights of Paranormal Activity with the Devil Inside the Girl with the Dragon Tattoo”. Media Mikes had a chance to chat with Kathryn about the new show and her love for comedy.

Mike Gencarelli: What drew you to the role if Ingrid?
Kathryn Fiore: She is my favorite character out of the roles I have played. When I read the script she wasn’t the typical TV wife. She and her husband Eddy are really in love. There isn’t that typical wife nagging the husband. They are happy and she is his biggest fan. When she watches him playing on stage it takes her back to the first time they met. I think this will be great for TV. I love that they are so cute.

MG: What has been the highlight so far of working with such a great cast?
KF: Everything has been great! It sounds so ridiculous but we have a lot of fun on set. It’s like working with your best friends. We laugh and joke around all the time. It hardly seems like work. Of course there are some late nights where you’re shooting at 2am and you just start coming up with some crazy characters and such. There are just so many highlights.

MG: Will we see your character singing at all during the upcoming episodes?
KF: I haven’t in this season but I would love to. I think they should totally have an episode where that happens.

MG: What can we expect from season 1 of the show?
KF: Overall I think it’s about the band getting into as much trouble as humanly possible. They get in to a lot of crazy antics. At the end the guys have this great bond where they always come together at the end. There’s one episode where we lose our kids but it not really that big of deal. The show has a lot of great music as well as some great special guests.

MG: How was it working in the hour long comedy format?
KF: It’s great. That’s a format I think TBS is really trying to get behind. By doing that you are able to get the comedic elements but you also get the realness. There are a lot of genuine moments as well as laughable moments.

MG: What was it like going from a film like “Hatchet II” to a role like you play in “Wedding Band”?
KF: It was actually really fun. Working with Adam Green and the Hatchet Family was so awesome. I am such a huge horror fan that it was great to play a really scary character. Going from that to playing Ingred who is a very grounded/real type character was fun. Ingred is more like me.

MG: Can you tell us about “30 Nights of Paranormal Activity with the Devil Inside the Girl with the Dragon Tattoo”?
KF: That movie is going to be a really great spoof of a bunch of films. We are just making fun of the whole horror genre. It has a great cast and is a little sillier and raunchier than some other films. There are also some actual scary parts that have great special effects. I may or may not make out with a ghost. (Laughs)

MG: What do you enjoy most about the comedy genre?
KF: My parents are both actors who when they were younger had a comedy act. They were on the Johnny Carson show and a bunch of others. I grew up with a lot of joking around and silliness. Comedy has always been part of my actual life. What more could you ask for than to be able to go to work and laugh all day.