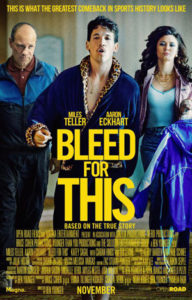 You have to really have followed boxing in the late 1980s – early 1990s to remember Vinny Pazienza. Billed as “the Pazmanian Devil,” he was a hard fighter who could take a punch and almost always got up off of the mat. “Bleed for This” tells the story of Vinny’s ultimate comeback.

1988. We meet Vinny Pazienza (Teller, in excellent form – and shape) trying hard to make weight. Eventually he makes it to the required 140 lbs but his body is no match for the beating he endures. After losing he collapses from dehydration. Unable to get a decent fight offer, Vinny goes to train with Kevin Rooney (Eckhart), who at one time trained Mike Tyson. However, since Tyson left him for Don King, Rooney has been struggling. He and Vinny connect and, after Rooney suggests that Vinny fight at a weight he is more comfortable with, things begin to roll. But as he reaches the top of the mountain Vinny soon finds himself flat on his back one more time.

Well-paced and well-acted, “Bleed for This” could have gone the way of most sport biographies, which is to introduce the protagonist, watch him win a little than put some horrible event in front of him. Following his greatest victory to date, Vinny suffers a broken neck in a car accident, an injury that pretty much insures that he may never fight again, let alone walk. But fate has different ideas.

This is another in a list of fine performances by Miles Teller, who was so good in last year’s “Whiplash.” Here he captures the ego of Pazienza perfectly, making a man whose boasting should make him unlikable actually become someone to care about. Eckhart, his hairline shaved back, is also strong as Mooney, with both Sagal and Ciarin Hinds excelling as Vinny’s mom and dad. If you’re a fan of a great comeback story, I highly recommend you give “Bleed for This” a try.