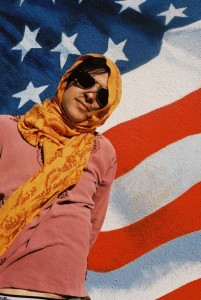 Jonny Kaplan is a singer/songwriter who together with his band the Lazy Stars have released a brand new full length album titled “Sparkle and Shine”. The group which has had their music featured on television series such as “House M.D.” and “Grimm” are releasing a new video in the coming weeks and Media Mikes had the chance to talk with Jonny recently about his work on the video and his long time collaboration with Wallflower/Foo Fighter keyboardist Rami Jaffie

Adam Lawton: What was it that made you decide to start performing music?
Jonny Kaplan: I was a huge rock and roll fan when I was growing up so it was something was my fantasy. I grew up in Philadelphia listen to FM rock radio. I was all about bands like Kiss, Aerosmith and the Rolling Stones. My first concert ever was the Rolling Stones on the “Tattoo You” tour.

AL: What can you tell us about your new album “Sparkle and Shine”?
JK: This is my forth album and there has been a lot of time between this record and the last because everything has been pretty much independently. For this new one there was definitely some divine inspiration as a lot of things have happened the last few years. I was in a motorcycle accident along with a bunch of other stuff. Fortunately or unfortunately it’s sort of the bain of existence for songs writers as shitty things make great songs. When I was writing this batch of songs there was a certain amount of vindication as they are pretty deep. After putting out three records prior to this one and touring Europe for the last 7 or 8 years as there were opportunities to play there I decided to shift my focus back to home and get this album out properly an set the playing field for myself here in the States.

AL: How much of an effect did your motorcycle accident have on the creation of this record?
JK: As far as the songwriting goes I was pretty much hold up in a hospital bed for two weeks with 20 broken bones. I have healed up remarkably but at the time I was a mess. I had a lot of time to sit around and I was in a bit of a dark place because I couldn’t do anything. That sort of forced me to write these songs. I think because of the shock of what was happening and not knowing what the future would hold that sort of opened up the flood gates. When it comes to songwriting you can sit down and try and write a song but the good songs sort of write themselves.

AL: Where do you generally start when writing a song, Lyrics or music first?
JK: It all depends. Sometimes there might be a guitar riff that I have been playing with for awhile that turns in to something but for the most part it’s almost like you hear something in your head and that eventually spills out. Some of songs are written in three minutes. Those tend to be the best ones and are always my favorites. You just hear something in your head, you grab a guitar and figure out the chords and there it is. It’s something that I never force.

AL: How do you first get connected with Rami Jaffie?
JK: Years ago I had a country rock band called Hummingbird. We used to play with the Wallflowers all the time so he and I became friends. He and I are like brothers. Rami has played on all of my records and was someone that was very instrumental in getting me to start this new record. He gave me the shove I needed to get going again. Even though he is always busy with the Wallflowers and the Foo Fighters we are roommates so we still have a lot of time to work on songs.

AL: Can you tell us about the video you shot for “When You’re Down” and what made you choose that song?
JK: At the time we were working on a video for Darryl Hannah. A lot of people don’t recognize her as a singer because of her career in acting. While we were getting ready to start work on her video for she had listened to some of the new material I had been working on. The night before we were set to shoot Daryl’s video she called me and said that she wanted to shoot a video for me as well. We ended up out on this crazy horse with our faces painted and we made this video which will be out in the next month or so. The video is low budget and indie to the core but it really turned out great. As for how this song was chosen Daryl actually picked it. It was by accident that this all happened. She really liked that song and I think it is definitely one of the strongest off the album. The vibe was great and things just worked well.

AL: Are there any plans in the works for a tour to support the release?
JK: Well as we speak Rami Jaffie has just informed me that we will be playing South By South West this year. That is amazing! Essentially there has been just so much going on with getting the album released that we haven’t been able to focus on getting a tour rolling just yet. We do have some shows booked like we will be in New York for the CBGB Festival and from there I will be heading to Buenos Aries with Brad Smith from Blind Melon to play for the first time. Things will be starting to unfold here very soon. Myself and the band are chomping at the bit to be out there playing as that is something we want to be doing every night. 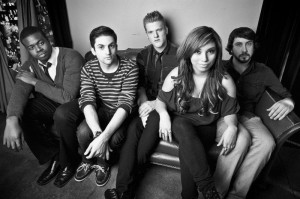 Scott Hoying and Avi Kaplan are members of the Arlington, Texas based a cappella group Pentatonix. The group burst on to the scene last fall after winning season 3 of NBC’s “The Sing Off” Media Mikes talked recently with Scott and Avi about the group’s formation as well as their new hit single “Starships”.

Adam Lawton: Can you give us some background on how the group came together?
Scott Hoying: We started out as a trio. Mitch Grassi, Kirstin Maldonado and I all grew up together. Later when I move to Los Angeles to go to school I decided I wanted to try out for “The Sing Off”. I talked to my friend and he told me I was going to need a really awesome beat boxer and bass if I wanted to have a chance at the show. We found Avi through a friend as he had a really great reputation for singing bass in the Los Angeles area. We later found our beat boxer Kevin Olusola through a viral video of him playingcello and beat boxing. We sent him an email and after a phone call or two he was interested and he came out. We actually all met the day before the audition. Everything just clicked and the audition went really well. Now we are all best friends and it’s a happy go lucky story.

AL: What was it like competing on the show while you were still getting to know each other as a group?
SH: It was an interesting thing. On the show we were developing both as a group and as friends. If you watched the show you could actually see how we interacted with each other. We were also finding out how to work with each other as we didn’t really have a leader. We sort of sat in a circle and just talked. It was super hard to do at first because we were all different people and liked different music. We eventually clicked and ever since things just keep getting better and better.

AL: Was it hard working with the cameras around?
SH: Not really. I expected it to be hard but literally after one day you forget that they are there. You just go on your way and do what you have to do.

AL: What have been your thoughts about the success of your EP and its first single“Starships”?
SH: It been overwhelmingly exciting. We never thought a year ago when we were trying out for the show that anything would become of it. To be able to do what we love and are passionate about is really great. When we made the EP we worked so hard on it and the scary thing is people don’t really buy albums anymore. We were afraid it wasn’t going to do well.  People have been really intense about supporting us and we really appreciate that. Things are going better than we have ever hoped. We are still celebrating.
Avi Kaplan: The whole thing for me has been a dream comes true. It’s an amazing experience. This is just something that I have always wanted to do. I never thought this type of music would be my profession. I am getting to live my dream everyday and it is just so amazing.

AL: What made you choose “Starships” as the first single?
AK: When we were arranging all of the songs “Starships” was one of the last songs we arranged. The song just stuck out and we were very proud of the arrangement. We thought that this song would be a great spring board for our album.

AL: What were the writing/recording sessions like for the EP?
AK: It was definitely a collective process as we all have different styles. We appreciate all types of music so things were very collective.

AL: What are the group’s plans for the rest of this year?
AK: We really want to start recording our next EP or LP. We also want to start working on our Christmas Album. Besides touring those are the two things on our plate right now. We have a few different shows already scheduled and will be announcing more as the dates become available.
SH: We are going to be touring in a lot of different places. Even though were not doing an official tour nationwide. We plan to do a number of shows in different areas where it will feel like a tour.