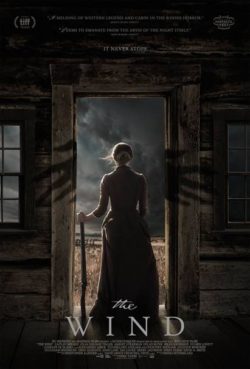 When it comes to horror in the Old West, there aren’t a lot of great examples, or even average examples. That’s peculiar because of how isolated people were in those times, complimented by the fact that urban legends and tales of the unexplained permeated the landscape. That brings me to “The Wind,” a film that doesn’t take long to introduce the audience to Lizzy (Gerard), who’s alone and distant from any signs of civilization. She only has one neighbor and they’re several miles away, far enough away in fact that she can barely see their cabin dot the horizon. Compounding her isolation is the fact that her husband is constantly gone, weeks at a time. She also suspects she isn’t alone.

“The Wind” is told, sometimes wordlessly, in a nonlinear fashion, forcing the viewer to piece together a tragic sequence of events involving Lizzy’s failed pregnancy, failing marriage, and the possibility that her mental health is deteriorating. Or maybe there is something howling with the wind at night. The nonlinear storytelling choice can be confusing, even for astute viewers. The single setting and bland landscape sometimes fail to help highlight at what point in time we’re at in the story. Some of the only signs that we notice we’re in the past is when Lizzy is sporting a soon-to-be miscarriage. On top of that, the film leaves various breadcrumbs surrounding the supposed evil entity lurking in the empty prairie lands surrounding her cabin, as well as what exactly has transpired to where Lizzy has found herself in such a precarious situation. It’s difficult to reveal too much in a short film that builds towards a harrowing final few minutes.

Since actress Gerard is left alone in many scenes, just like Lizzy, it’s up to her to pull off a solo performance that’s not only captivating, but also keeps the plot moving forward, and she nails it. Gerard does a magnificent job at handling both the fear and frustration that Lizzy is surely enduring. Even though she is relatively alone and without a life preserver in the great unknown, Gerard never paints Lizzy as a damsel in distress or shows any signs of helplessness. Instead Gerard beefs up that steely reserve that Lizzy must muster to overcome whatever comes at her, supernatural or not.

There’s an underlying commentary about how women have been mistreated, and not just in the 19th century. Lizzy is constantly ignored and her concerns are mocked. Instead of lending an ear and/or investigating her claims of something sinister stalking her cabin at night, she’s told to be quiet and to keep up with her wifely duties. It’s also implied she’s treated worse after losing her child. While the written story doesn’t hit the right notes, the visual story on screen is masterful. Director Emma Tammi, in her feature film debut, shows a knack for building a dread-filled atmosphere through hair-raising cinematography. This is the kind of freshman outing that promises better films down the pipeline.