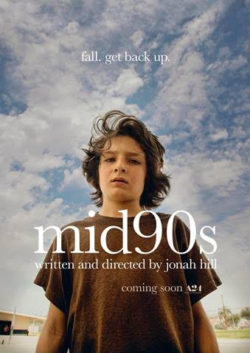 I’m not sure who this movie is for. Sometimes coming-of-age films ring true for everyone because it speaks specifically to those who lived the generation it represents and still manages to slip in some universal truths. “Mid90s” seems specifically niche: stoner skateboarders who grew up on “Ren and Stimpy” cartoons and played NES video games. It’s not necessarily a bad thing because the film manages to stretch outside those confines, painting a broad picture of children who’ve come from single parent homes or troubled living conditions. You just have to squint a little hard to see it.

The film focuses on 13-year-old Stevie (Suljic), who actually looks a lot more like he’s 10. He seems to take daily beatings from his older brother, Ian (Hedges), who’s just turned 18. Their single mother, Dabney (Waterston), loves them unconditionally, but seems to have taken a hands-off approach during their pubescent years. Ian and Dabney become background noise in Stevie’s life when he’s accepted into a group of rebellious young boys hanging out at a skateboard shop. This misanthropic brotherhood doesn’t seem to have much in common, but the glue that binds them is their status as outcasts at home, school and in life. The alpha dog of the group, Ray (Na-Kel Smith), also manages to keep them all in line, even when they’re at each other’s throats.

“Mid90s” is the kind of movie “Lords of Dogtown” wishes it was, even though the target audience might fight me on that unpopular opinion. “Mid90s” prevents itself from being overly dramatic and unrealistic thanks to Hill’s raw script which highlights the politically incorrect vernacular of the time while unflinching capturing troubled youth in Los Angeles. However, there are a lot of gaping flaws in how everything is presented. The comedy sprinkled throughout sometimes works, but also undercuts the seriousness of several situations. It also may not be funny for those uncomfortable with how carefree some slurs were used by teens in the 90s. There’s also one scene in particular that quickly goes from uncomfortable to borderline exploitive.

There are flashes of creativity with Hill’s directorial debut, but too often he limits his characters and the stories they have to tell. There’s an inventive subtleness to what Hill reveals about Stevie and his crew, but too often we’re left with more questions than answers. The scope is so narrow that the average moviegoer may find “Mid90s” to be too brash and at times, a bit derivative. But underneath its crass nature, are good-intentions and a unique perspective on growing up that we’ve rarely seen. 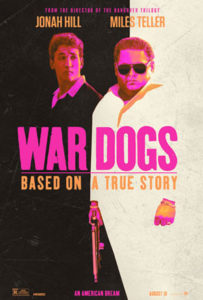 Who wants a little excitement in their lives? In 2005 the answer to that question was Efraim Deveroli (Hill) and David Packouz (Teller), former high school pals who reunite while attending a friend’s funeral. Via voiceover we learn that our government spends an average of $17,500 per soldier when outfitting them for war. War is recession proof. There are a lot of crazy gun nuts out there, but none as crazy as the U.S. Government. Someone needs to provide them…why not Efraim and David? Sounds pretty exciting, doesn’t it?

Thanks to some great performances, “War Dogs” rises above similar themed films (for some reason, I kept thinking back to 1983’s “Deal of the Century” as well as 2005’s “Lord of War”). Teller, who is best described as his generation’s John Cusack, gives David a sense of morality. Tired of giving massages to rich people on South Beach, he jumps at the chance to go into business with Efraim. And by the time he finds out HOW the business works, he’s made enough money to convince him that the chances he takes are worth it. On the other side of the spectrum is Hill, who has gone from comedy fanboy to multi-Oscar nominated actor. His performance here is strong, going from humorous to dramatic and back without seemingly breaking a sweat.

The supporting characters, including Bradley Cooper as an infamous gun runner and Ana de Armas as David’s love interest, also make the film enjoyable. Based on a true story, the action keeps the film flowing smoothly without becoming preachy. As one of the last films of the summer season, “War Dogs” is definitely one to watch before you end your summer vacation. 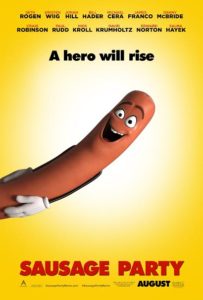 Media Mikes has teamed up with Sony Pictures to give (10) lucky readers, and their guest, a chance to attend the Kansas City premiere of the new animated comedy “Sausage Party.”

To win, all you have to do is head here and get your tickets. This is a first-come, first-serve promotion and, once all of the passes have been given away, the contest is over. Good luck!