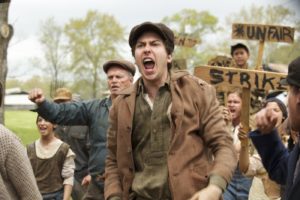 Among the many great novels by John Steinbeck are a couple detailing with life during the depression. Most people are aware of “The Grapes of Wrath,” which won a Pulitzer Prize and was made into a film starring Henry Fonda. The lesser known novel, written in between “Tortilla Flat” and “Of Mice and Men” (Jesus, this guy had some talent) was titled “In Dubious Battle.”

The year is 1934. We find ourselves in the Bolton Apple Orchards of California. Many people have picked up back east and headed west with the promise of available work and great wages. However, the influx of laborers has driven wages down, much to the chagrin of the apple pickers. A burly man named London (D’Onofrio) confronts old man Bolton (Duvall). Having been promised three dollars a day for their work, the workers have only received one dollar a day and are, justifiably, unhappy. They want to fight for what they have owed them. They only need a little nudge.

Some of you reading this may be saying to yourself, “I didn’t know James Franco directed.” I am a fan of his film “SAL,” but I was shocked to learn that, if the Internet Movie Data Base is to be believed, he has no less than SEVEN films coming out this year that he directed. He really is a renaissance man! Franco also stars here as Mac, an organizer for a group that is trying to unionize the apple pickers. He had taken under his wing a young man named Jim (Nat Wolff). His eyes not truly open, Jim is drawn to the movement by the fiery rhetoric of Mac. Together they apply for work at Bolton’s orchards and try to blend in. They begin to make small talk with the other workers, trying to feel out who can be a leader and discover London. They discover that most of the workers have had their spirits crushed. When Jim makes an optimistic comment he is met with a frown. “That sounds like hope,” he’s told. But hope may be all these people need.

Perfectly paced and skillfully cast, “In Dubious Battle” is one of those small films that occasionally see the light of day. With a perfect period background and an accompanying musical score by Volker Bertelmann, whose score for this year’s “Lion” has been nominated for an Academy Award, the film takes you back in time to a period when life seemed easier but surely wasn’t. And Franco seems to be the new Woody Allen in that everyone wants to work with him. He has filled his cast with some of the best (and in my case, favorite) character actors, including Ed Harris, Bryan Cranston and John Savage. As London, D’Onofrio adds another great character to his resume. Wolff begins the film clad in innocence, growing more defiant as the story progresses. Franco’s Mac is almost a step-brother to “The Grapes of Wrath”s Tom Joad, pushing forward and giving the occasional inspirational speech.

I’ll admit here that I am a member of a labor union. My current home-state, Missouri, recently voted to be a “Right to Work” state. I found this film inspirational, both in content and in the commemoration of those that came before us.