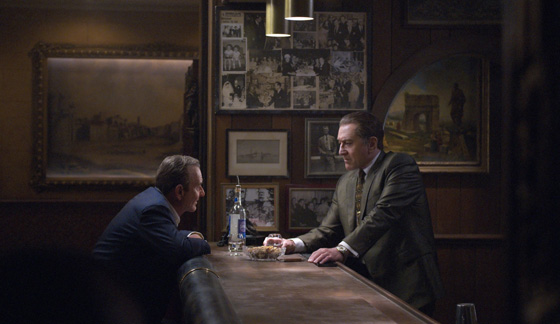 There’s a lot of background noise surrounding Martin Scorsese’s “The Irishman.” On one hand, you have the general movie-going crowd groaning over the stuffed runtime, and on the other hand, you have industry insiders bemoaning the dispute that Netflix has had with cinemas. In a lot of ways, these issues stem from an older generation, wondering why they need to sit through a movie this long or would want to seek out a movie that isn’t at their local conglomerate movie theater. These feel like such miniscule problems when you watch this film and realize it’s one of the best movies of 2019.

When we first meet Frank Sheeran (De Niro), he’s beside himself in a nursing home. No one pays any mind or bothers talking to the WWII veteran turned truck driver turned hitman. He has a wild story to tell, but no one to tell it to. So, he tells it to the audience. It begins in 1950’s Pennsylvania, where his stonewalling in court earns the respect of local gangster, Russell Bufalino (Pesci). The two quickly develop a bond and appreciation, so Bufalino starts having Frank do odd jobs, not petty crimes mind you, but murder. Frank makes a big enough splash that he’s soon introduced to infamous teamster, Jimmy Hoffa (Pacino). That’s when things get weird and violent.

Unlike Scorsese’s previous crime and mob movies, this film moves at a confident, quiet pace. It’s not sexually bombastic like “Wolf of Wall Street,” or violently speedy like “Goodfellas.” It has a lot to say and it’s going to take its God damn time. It has two and a half decades to cover, along with various flashbacks, and flashbacks within flashbacks. The narrative structure is built around the most shocking revelation of this movie, which most anyone with an understanding of criminal history in the U.S. should know before turning this movie on, but just in case, I won’t reveal it. Despite the lengthy runtime and the years of story the film pours over, this movie is rarely boring.

Scorsese is a master at making overly long films. He makes three hours seem like a walk through the park. It’s the style in which he shoots, the way he tells the character’s story and the outlandishness that he captures on screen. It’s almost like he taps into this primal ID, making us feast on the depravity of others. But “The Irishman” takes on small, but major step towards a different path. “Goodfellas” or “Wolf of Wall Street” doesn’t end well for the film’s antagonists. Their punishment is generally a mundane end to their life, but “The Irishman” takes it a step further. It shows that this wild lifestyle, filled with action and fun, ends alone. The final 30 minutes are bittersweet.

It unfolds in such an interesting way, that we become more wrapped up in Frank’s life and how he manages to balance these violent side gigs with a picturesque home life, with a wife and kids. We get little breadcrumbs about the Bufalino crime family and how much their tentacles have penetrated the East Coast. We also get a lot of intriguing political dramas as Pacino pushes the limits of overacting through Hoffa. Pacino never quite reaches the unnecessary acting heights of a film like “Scent of a Woman,” but he comes precariously close. Hoffa is crafted in such a flawed manner, that you come to sympathize and loathe him from scene-to-scene. Meanwhile, Pesci, in his most reserved role, is just as menacing as ever behind the wrinkles of Bufalino. There’s a lot of creative supporting work here as well from the likes of Ray Romano, Bobby Cannavale and Harvey Keitel.

Putting a sweeping epic like this on Netflix seems bizarre to many. Decades ago, folks would have lined up around the block to see this film and theaters would have slapped an intermission in the middle so that people could refill on sugar drinks and salty popcorn. Instead this movie will be watched by people on their TVs at home, their computers, or even on their smartphone. There are a lot of people wondering why this film isn’t being shown the classic way. Maybe Scorsese recognizes the direction the industry is heading. He recently caught flack or making a negative comment about Marvel films, even though they were grossly taken out of context in the never-ending effort to satisfy today’s outrage culture. “The Irishman” feels like a bookend to a beloved genre, as Scorsese reflects on his past and says goodbye to the murderous crooks that made his career.