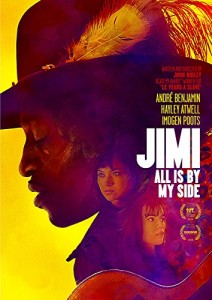 It had to be tough to make a film about the late, great Jimi Hendrix without the support of his family. Most importantly, this means there will be no “Jimi Hendrix” music in the film. No “Foxy Lady,” “The Wind Cries Mary,” “Purple Haze.” But I could except that fact, as long as the story entertained. Sadly, “Jimi: All Is By My Side” doesn’t.

The film takes place in a one year period between 1966 and 1967. Hendrix (a well cast Benjamin, who is really the ONLY reason to see this film) is playing in New York City at a small club in front of a crowd of dozens. He’s playing rhythm guitar in a terrible band. In fact, the guitar he’s playing isn’t even his. He borrows it each night. One evening he is seen by Linda Keith (Poots), who at the time is best known as being the girlfriend of Rolling Stone Keith Richards. She see’s the talent behind the shy face and convinces Hendrix to express himself through HIS music. She also gives him one of Richard’s guitars, which I assume she had strung for a left handed guitarist. The relationship is clearly business but others get the wrong idea. Linda introduces Jimi to Chas Chandler (Andrew Buckley), currently the bass player for the Animals and a young man looking to get into management. He convinces Jimi that London is the place to be and offers to bankroll his visit. And here is where the film stops. Dead.

Writer/director Ridley won an Oscar last year for his script of “12 Years a Slave.” Here’s hoping he researched that project better. Twice in the film a television personality claims that the up and coming bands on the British scene are Queen and the Who. Unfortunately, Queen did not form until 1970 so this chick may have been Nostradamus’ daughter. On his first night in England, Jimi meets Kathy Etchingham (Hayley Atwell) and the two become a couple. The rest of the film consists of the following scenes, repeated often: Jimi plays horribly, Linda tells him he’s blowing it, Kathy encourages him. Again and again and again. There are also a lot of shots of Jimi trying to tune his guitar (like Robert Johnson before him, Hendrix would often tune his guitars down to get a certain sound) Every now and then the story throws in a quick cameo (look, it’s Eric Clapton…hey, it’s Paul McCartney). Also, Ridley seems to have just looked at a scrapbook of Hendrix photos and then written scenes around them, so that each scene ends up looking like the original photo. Later scenes, including one of Hendrix viciously beating Kathy with a phone, leaving her scarred and bleeding, never happened. Much is made about Jimi having to play an upcoming concert great so that he can legitimize his recent invite to play at the upcoming Monterey Pop Festival. When that concert happens, with a couple of the Beatles in the audience, Jimi wows the crowd with a cover of “Sgt. Pepper” and the rest is history.

If there is a positive to this film it is the performances, particularly by Benjamin, Poots and Atwell. I was 10 years old when Hendrix died on October 15, 1970, but I’ve heard enough of his music and seen enough clips of him on television to know that Benjamin has nailed the persona and the man behind the music. It’s a performance that, in a better film, should have earned him some award consideration. And the fact that there is NO Hendrix penned music in the film but surely they could have had Benjamin do a version of “Hey Joe” (written in 1962 by Billy Roberts) or “All Along the Watchtower” (written by Bob Dylan and out in 1967) to remind viewers of what a musician Hendrix was, rather than just have him fumbling on a guitar and throwing in the occasional lick. Thankfully, late last year. the Hendrix estate announced they are looking to approve a film that treats Jimi right. And don’t just take my word for it. Upon seeing “Jimi: All Is By My Side,” Kathy Etchingham, who was Hendrix’ inspiration for “Foxy Lady,” “The Wind Cries Mary” and others, called it “absolute nonsense.” And to quote David Huddleston in “Blazing Saddles” — “Who can argue with that?”

The only EXTRA is a short piece on how the music for the film was created. 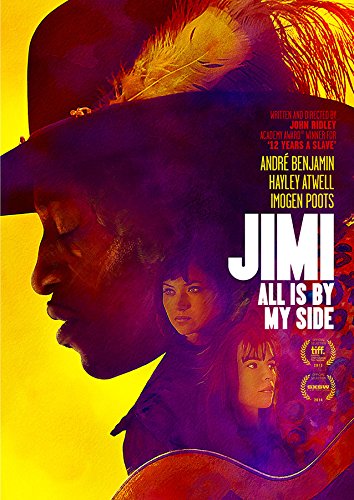 Media Mikes has teamed with XLRator Media to offer one lucky reader a chance to win a DVD copy of the film “Jimi: All Is By My Side.”  The film, which stars OutKast’s Andre’ Benjamin as famed guitarist Jimi Hendrix, covers the musician from 1966-1967, the year Hendrix began the jump from backup guitarist (early in his career he and his band opened concerts for the Monkees) to guitar legend.
All you have to do to enter to win is let us know below who, in your opinion, is the greatest guitarist EVER?  Jimi?  Eddie Van Halen?  Chet Atkins? (ok, I know I’m dating myself here!).  Leave you choice below and on January 13, 2015 one random winner will be chosen.  That winner will notified by email.  This contest ends at midnight on Monday, January 12, 2015.  Good luck!
“Jimi: All Is By My Side” will debut on DVD, Blu-ray and Video-on-Demand on Tuesday, January 13, 2015.
Read Complete Article
Filed Under: Giveaways Tagged With: biopic, dvd, hendrix, jimi, side, win, ...