I’m reminded of “Bad Moms” as I reflect on “Rough Night” because it appears the raunchy comedy playing field is beginning to even out. For every Seth Rogen vehicle there appears to be a female ensemble dropping four letter words and talking about their menstrual cycle like men talk about their farts and ejaculations. While it’s good to see things equalizing, I can’t help, but also think about “Bridesmaids” or “Trainwreck” and wonder why they all can’t be on that same level.

The set-up is simple; Alice (Jillian Bell) is setting up the bachelorette party for her best friend Jess (Johansson). Joining them on this girl’s only weekend is their other friends from college, Frankie (Ilana Glazer) and Blair (Kravitz), and Jess’ new friend, Pippa (McKinnon). After a night of pot smoking, drug experimentation, and over-priced Miami bar drinks, they retreat to the safety of their getaway pad. That’s where they order a stripper and in an accidental heated moment, kill him. I swear the premise is slightly funnier than fortuitous murder.

The main gags come from their misguided attempts at concealing the crime scene, disposing of the body, and the brief cuts to the bachelor party that Jess’ fiance, Peter (Paul W. Downs), is attending. The brief glimpses of the bachelor party, and its ensuing insanity, are the first of many instances where “Rough Night” pokes fun at role reversals. While Jess and her gang do bumps of cocaine while talking about scoring tail, Peter and his crew sample fine wines and talk about their emotions. These moments of subtlety are actually some of the film’s best moments.

Other times the movie falls into a predictable coma, finding it relying on ill-fitting and unfunny jokes and double entendres worthy of a bad Adam Sandler film. However, “Rough Night” moves at such a frenetic pace, there’s very little time to ponder those moments. It also helps that up-and-comers, Glazer, McKinnon and Bell, feast on the scenery while Johansson and Kravitz do fine trying their hand at comedy.

“Rough Night” is more or less the female version of movies like “The Hangover,” which isn’t a bad thing, but it lacks creative originality. Glazer and director Lucia Aniello work on the TV show “Broad City,” combining absurdist comedy and life in New York City. While there is flirtation with genuine human emotion and female camaraderie, it doesn’t package it as neatly as a 22-minute TV show. Hopefully “Rough Night” is a stepping stone to bigger and better movies. 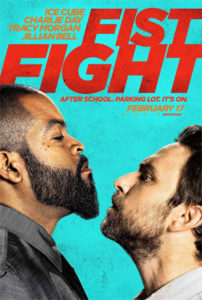 Ah, the last day of the school year. A time to clean out your locker, turn in your books and get ready for the summer. Unless you’re a student at the high school featured in the new film “Fist Fight.” Then it’s a time to rebel.

Andy (Day) is an English teacher whose last day of school starts with a student parked in his parking spot. Andy is an expectant father and is worried that school budget cuts may affect his job. Andy is pretty easy going and it’s easy to root for him. Then there is Strickland (Cube – wait, is that right? Is “Ice Cube” all inclusive? Is “Ice” his first name and “Cube” his last?” How about if I call him O’Shea Jackson?). Strickland is a no-nonsense teacher who’s not afraid to challenge his students. Physically. When a classroom altercation gets reported to the principal, Andy inadvertently gets Strickland fired. Angered, the man challenges Andy to a fight after school. Place your bets.

I don’t know what it is about Hollywood and films set in high school. From “3 O’clock High” to “Big Bully,” it seems like kids (and teachers) can’t get along. And who would want to in this school. It’s one thing to pull a few pranks but what the students are doing here would normally result in criminal records. Especially in a world were bullying is prevalent. Have the principal followed around all day by a Mariachi band? Funny. Destroy his car? Jail.

The story is the result of a script by two first-time feature writers and it shows. Jokes, or what are supposed to be jokes, flow quickly and some hit their mark. But many more miss it. When Charlie Day can’t make you laugh you have a serious problem with your material. Day tries hard, as does Mr. Cube (how’s that?) but they needed better dialogue. The fact that Cube is named Strickland makes me wonder if he’s named after the bald teacher that terrorized Marty McFly in “Back to the Future.” Though I wonder if the writers were that clever.

On the plus side, Charlie Day does well in a comedy he’s there to carry and it’s nice to see Tracy Morgan back on the big screen.