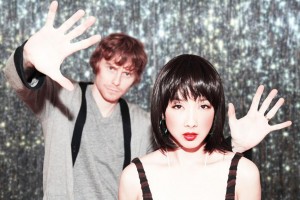 Jed Whedon & Maurissa Tancharoen are the co-writers behind such amazing projects like “Dr. Horrible’s Sing-a-long Blog” and Fox’s Dollhouse.  They recently released an EP album together under the name of This Girl.  Everyone seriously needs to check out this album, it is very fun and catchy.  They also just recently announced that they will be writing Marvel’s upcoming “S.H.I.E.L.D” TV pilot with “The Avengers” helmer Joss Whedon.  Jed & Maurissa took out a great deal of time to do a song-by-song analysis of their album and also discussed the long-awaited “Dr. Horrible” sequel.

Mike Gencarelli: Tell us how the name This Girl came about?
Jed Whedon: We were trying to present something that wasn’t just us and was trying to put a concept behind it. If you look at the photo shoot we did, it was me pushing Maurissa into the front.  And I think we were just talking and I was like “Hey look at this girl!” and Maurissa said “Hey, that could be the name” [laughs]. So that is how it happened.

MG: How long would you say this album took to complete?
Maurissa Tancharoen: Well it was sort of drawn out over the course of last year. It is a side project to pass the time since we were stuck at home for a long time. I had a rough health year last year. So Jed out of the kindness of his loving-husband heart [laughs], figured to pass the time we should record some songs. We worked on it sporadically over the course of last year. We never pushed to get it done and took our time we it. Right Jed?
JW: Yeah, I would say about a year. We would work on it for a while and then just toy around. When we realized that we were close to being done, then we gave a real push to finish it up.

MG: Tell us the inspiration behind the songs first up “Bombs” Away”
JW: Usually the way we work is music first. We just started building tracks and of course a ton of then never go anywhere. So, I think the general concept of the record was the make something upbeat and fun. Maurissa has a little bit of the R&B background.
MT: [laughs] Yeah, he told me “Let try and make you sing as white as possible.
JW: [laughs] Yeah. Like a androgynous, very vanilla sounding pop record. That was our inital concept.
MT: That was also the concept behind This Girl was that the songs do fall under the indie pop category. But overall they are all over the map. Like “Mr. Electric” is just so different” and “Dangerous” has a little bit of hip-hop and R&B vibe but very subtle. You are this girl on each track basically.

MG: Speaking of “Dangerous”, tell us a little more about that track?
JW: “Dangerous” was our first track. The concept was basically to do a really light vocal about getting your heart ripped out of your chest. The idea was that the music would be so kind and easy-going but the lyrics would be darker.
MT: She is basically a stalker or the quiet voice of the stalker. She is saying take my hard and crush it cause I am watching you and that is all I want.
JW: We had the track and had the idea of a jazz guitar. So I brought my older brother Sam in, he is an amazing guitarist. We recorded for an hour and just riffed on it. The guitar wasn’t meant to be this epic solo. But on one of the takes, I told him to just go crazy with it and that is the one we used.

MG: Next up we have “In Your Dreams”, tell us about that one?
JW: The idea was to make a five song album. We had the five tracks and Maurissa said we should just put it out. I thought let’s just do one more and whatever it is it will end up being our favorite. Your last song always ends up being your favorite.
MT: And it is…it is definitely our favorite.
JW: So, that one was the only one with a chorus before any tracks were laid down.
MT: I just love the story about a guy living a very monotonous life and wanting to be elsewhere.
JW: It is sort of a braggy mean song.
MT: It is a very mean song but again it is sang so gently it tricks you.
JW:  I just love the idea of “Your obsessed with me. You know it. Your pathetic” and then the last line of the chorus is “In your dreams”. Like “Yeah right, you wish”. In general that is something we like to do, which is play the lyrics against the song. It gives it this nice extra layer.

MG: Awesome, I love that song also; next up tell us about where “Second Nature” came from?
JW: That is another one that started with a drum beat feel. We wanted that to be kind of upbeat…
MT: That is also a sad song…all of our songs are sad [laughs].
JW: Yeah [laughs], considering how upbeat we always are.
MT: I guess since we were having a harder year, it came out in the lyrics.
JW: Happy lyrics are boring. Jane Doe is about a girl feeling sorry for herself. The music just grew organically from a general feel and then just sort of evolved.  I know that may seem a bit boring but it is true.
MT: That is the way that Jed has always worked. It is the music first. It is funny when he comes up with the melody. He will sort of half record the melody. It will be a bunch of gibberish and then a line that totally sticks and becomes the actual chorus.

MG: One of my favorites, tell me about “Mr. Electric”?
JW: That was one of the tracks that I had the hardest time with, since it was a hard mix for me.
MT: We almost took it off.
JW: We didn’t like it very much and now of course it’s everyone’s favorite.
MT: It just stuck out and was different from the rest. Up to the very last minute we were going to yank it. It is just unbelievable the response we have gotten about it from fans.
JW: It is basically another dark side of a happy song. I guess it is sort of a 50’s upset, “Mr. Sandman” rip-off. It is about a drug dealer and a girl that keep getting hooked. We also have a cool video concept in mind for it.

MG: “Remains” was previously released a single back in 2009 for “Dollhouse”, tell us about why you chose to close the album with it?
JW: We just wanted to put in on the album. Since we only had one tune out there together, we wanted want to put it on one album. “Remains” is a more genuine track and we  felt like it was a good bridge between “In Your Dreams” and would also work well after “Mr. Electric”.

MG: Any more plans for Jed Whedon and The Willing in the future?
JW: We do have a lot of projects going on right now. If we ever have any downtime, which is where This Girl came from, I will definitely spend time making a new one. That is the plan right now. I hate saying that though since when it comes out in four years people are going to wonder what took so long.

MG: Jed, if your brother can stop making films that gross $1 billion dollars [laughs], where do you guys think that a “Dr. Horrible” sequel lands your timeline?
MT: It is definitely in our timeline.
JW: It is for sure. There are a lot of projects in the works now. Everyone in the world now know how busy Joss is now. We are definitely planning to do it.
MT: We have more of a solid plan to aim to start next year.
JW: Not only do we think we will get it done, we also think it will be pretty great.