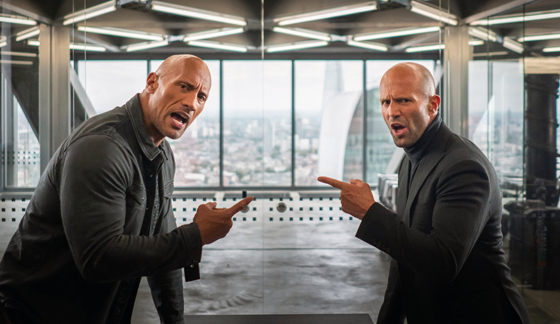 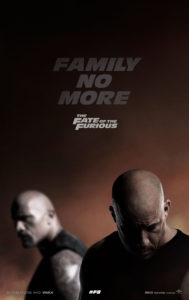 “The Fast and the Furious” franchise experienced a Renaissance when it embraced mindless action and over the top stunts, combining CGI with a real-life demolition derby, back when “Fast 5” was released. Since then it’s embraced this absurd concept that the fate of the world rests in the hands of speed junkies that refer to themselves as a close-knit family. Its intentional cheesiness allowed us to ignore the laws of physics and embrace these street racers turned globetrotting heroes. But “Fate of the Furious” stomps on the brakes by hovering precariously close to taking itself too seriously.

Dom (Diesel) is approached by a mysterious figure known as Cipher (Charlize Theron), while on his honeymoon in Cuba. Without the audience seeing it, a cellphone video convinces Dom to betray his “family,” go rogue and work for Cipher. Die-hard “Fast and the Furious” fans, who accept its cheese or eat it up like housewives munching on daytime soap operas, will certainly have their eyes glued to the screen as the betrayal unfolds. I, on the other hand, rolled my eyes and began waiting patiently for some neat explosions.

It’s difficult to talk about the plot in-depth because much of the movie hinges on why Dom is going rogue and Cipher’s connection to the greater world that’s been established through eight movies now. For a movie franchise about fast cars, scantily clad women, and explosions, there’s a surprising amount of depth within it’s pulpy drama, much like WWE’s Wrestlemania. That’s not lost on people who’ve spent over a decade and half with the group, or newcomers who’ve embraced it recently.

Dwayne Johnson, Jason Statham, Tyrese Gibson, Chris “Ludacris” Bridges, Michelle Rodriguez, and a handful of other side characters are back to appease fans who’ve stuck with the franchise since 2001. For those who aren’t familiar with the franchise, or have lazily watched them throughout the years like me, the paper thin plot and lack of meaningful development is still hanging in there. That’s actually a positive since anything more would have otherwise made the series unnapproachable as time went on.

The main problem is that “Fate of the Furious” tows the self-serious line it found itself on the wrong side of before “Fast Five.” Viewers are treated to exposition that feels like a lecture, instead of fast cuts that visually summarize our new villain, the story’s direction, or the plot. It’s a real drag when characters are reduced to robotic dialogue and technobabble during 30 minutes of talking; much like listening to two computers share data. It kills the adrenaline, especially after watching dozens of self-driving cars cause mayhem on the streets of New York City or a prison break highlighting Statham’s parkour fighting abilities.

Most of the cast knows they’re making a dumb movie and roll around in the scenery, chewing on bits and pieces while in their million dollar speed racers or while breathlessly fighting in ice covered Russia. Statham and Johnson are the best at this. Maybe they should have instructed Diesel and Rodriguez on how to liven up a little. Because Diesel is now the driving force, and one of the producers of the franchise and this film, his character has been place under the microscope. It’s a near fatal mistake assuming that the audience cares about him. People connect more with Johnson’s soccer dad persona and Statham’s hard-ass with a soft spot more than Diesel’s stoic demeanor. It appears that the loss of Paul Walker has left a big hole in the storytelling department.

“The Fate of the Furious” is an entertaining distraction that tragically relies more heavily on its slow storytelling pace, rather than its edge of your seat action. Despite its flaws, there are very few movies being given blank checks so that their characters can face off against a thermal nuclear Russian submarine with only nitrous powered cars at their disposal. The high of “Furious 7” makes “Fate of the Furious” a letdown, but the character’s affinity and eye popping action are enough to make it a passable addition to the franchise.