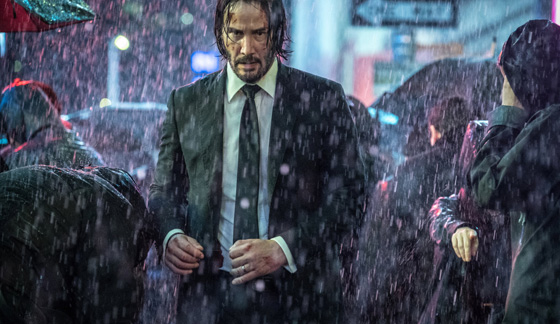 Lionsgate probably began 2019 with the hopes of their own superhero franchise. Well, at this point in the year, we know that “Hellboy” was a massive flop, critically and financially. At least they can hang their hats on the future of another franchise, one that was unexpected back in 2014, John Wick (Reeves).

Just like the prior film, “John Wick: Chapter 3- Parabellum” rapidly continues the saga of the assassin known as “The Boogeyman,” although no one refers to him by his nickname this time around. If you haven’t seen the previous films, then this film review is going to read like gobbledygook. When we last left Wick, he had just got done putting a bullet between the eyes of a powerful crime lord, he had been declared excommunicado from the Continental for those actions and the High Table had slapped a $14 million bounty on his head. With every assassin hungry to become a multi-millionaire, “Parabellum” wastes no time as the game is quickly afoot.

At this current time, if I was to rank the Wick films, I would put “Parabellum” last. That’s not to say this is a bad movie because it’s still a solid entry, but it doesn’t quite match the highs of the two previous films. Thankfully, my knocks against the film aren’t in the action department. This movie is tight, quick and exciting when the guns are drawn. The humor from the prior films remains intact as characters treat every scene seriously, despite the absurd circumstances and weapons at their disposal. When he has a gun in his hand, Wick remains a dead shot, but it’s during fist fights and other hand-to-hand combat moments that the movie shines as a violent tour de force. Not only does Wick get to utilize knives and swords a lot more this time around, but he manages to use various inanimate objects as instruments of death. It’s like a watching a symphony play to most stylized and brutal balet. This might actually be the goriest Wick film so far as Wick disposes of people in several gruesome ways. I could ramble on a bit more about the film’s glorious savagery, but it’s once the action subsides that the movie begins to falter.

The movie pumps the brakes towards the middle. While the first two films built upon the world during the lulls, this one seems to sputter. The filmmakers seem hesitant about building upon the rich tapestry because it seems unsure of how to proceed or grow. We get dashes of Wick’s past, but there’s not enough for audiences to grasp and understand Wick or the world around him. We get the feeling that the Continental and High Table have their tentacles around the globe yet the film doesn’t necessarily follow those tentacles down any fascinating wormholes. Instead we’re left with a throwaway character, played by Halle Berry, some trash bin villains and a mysterious figurehead that seems to be the “God” of this criminal underbelly.

It’s safe to say that because these film sequels are “chapters,” more Wick films are down the pipeline. So those lingering questions and thirst for more information will hopefully be fulfilled in later films. For now though, this may be viewed as a minor hiccup in an otherwise impressive film franchise. “Parabellum” reminds us why Wick is such a likable killer while offering up another glorious knockdown, beat down, visual smorgasbord of unblinking gun porn and fist throwing viciousness that remains unmatched by other contemporary action blockbusters. Compelling storytelling problems aside, Wick is still just as strong as trigger finger.