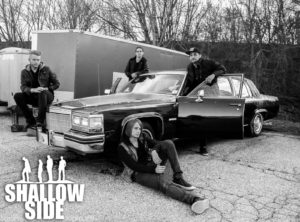 Rock is dead, they say? Hogwash. Don’t even bring up such an idea with the four-piece Cullman, Alabama-bred rockers Shallow Side, who have taken it to be their personal holy mission to spread the glory of modern rock & roll as far and as wide as they can to anyone who will listen. “The energy and excitement of rock & roll is missing nowadays, and we need it now more than ever,” believes Shallow Side’s frontman, vocalist Eric Boatright. “Our goal is that we want to revitalize that entire genre and remind the world how rock & roll can be such a strong force in everyone’s lives.”

The proof of Shallow Side’s pure rocking prowess can be found within the deep grooves of their new EP titled ONE, which is being released by Thermal Entertainment on January 13, 2017. ONE is one tight, ass-kicking affair from the get-go, from the wham-bam all-out jam of the opening track “We Roll” to the fist-waving defiance of “Rebel” to the put-up-or-shut-up manifesto of “Fight or Flight” to their all-guns-a-blazing modern-day take on a well-loved rock classic, Styx’s “Renegade.” (Oh, mama!)

Ultimately, Shallow Side is creating new music that fuses the best intentions of classic rock with modern crunch by planting their flag at the intersection of where Shinedown meets Styx and Journey meets Daughtry. One song Shallow Side fans will be grooving along with right from the start is the current single from ONE, “Fight or Flight,” which unifies the ideas set forth with the one-two punch of “Rebel” and “Renegade,” the EP’s initial radio hits songs. “That’s the heaviest song on this EP,” Boatright clarifies. “It tips the hat to the rock & roll market that exists today and also says, ‘If you guys want to run heavy, we’ll run heavy with you. We can do that — and we’re not scared of it, either. We’re very good at it.’”

Shallow Side’s main message is one of unity. “When we first started, rock & roll wasn’t for us,” Boatright concludes. “We wanted to go to a concert, enjoy the music, sing along, and be a part of the overall song and dance. We’re now looking to bridge that gap to bring the family together to where rock & roll was at one point. The mission since we began was to take the wheel and steer it back into a direction where everyone from all walks of life could enjoy a good rock show.”

Considering the band’s all-in philosophy, it appears that ONE is most definitely the best name for this raucous EP. Let’s all join together and revel in having Shallow Side show us the ONE true way to the future of great rock & roll.injuries while touring and it hasn’t slowed us down enough to lose momentum.”

The band just received their highest honor to date being selected Loudwire’s Best New Artist of the Year (past winners included Saint Asonia and Baby Metal).

The new 6 song EP is a prelude to a full length release to come out later this year. 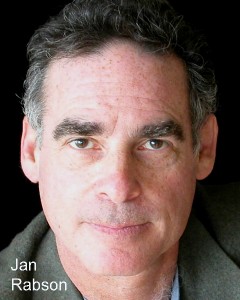 Jan Rabson is a voice actor known for his working with Pixar and Disney. He has worked on “Toy Story 3”, “Up”, “Cars Toons” and “Finding Nemo”. Jan also voiced Tetsuo in American dub of Japanese cult classic “Akira”. Media Mikes had a chance to chat with Jan about his voice work and his films.

Mike Gencarelli: Can you give us some background as to how you got involved with Disney and Pixar?
Jan Rabson: Basically I got involved originally through Mickey McGowan and went in with a loop group doing background voices for the original “Toy Story”. After I got back from that session I told my now wife that I had just worked on what “Steam Boat Willie” was to 1920’s this film was animation for the 90’s. I could tell that this was going to be fantastic and it was really exciting. We worked with John Lasseter himself. With Pixar we don’t just act like a normal loop group – we get to do real individual characters (Axel, great death scene in “A Bug’s Life”, Sparks in “Toy Story 3”, etc) We improvise and they choose what they like in the editing room. It’s a fun creative process. It was a fantastic time. They are great people to work for.

MG: What is the process for being brought on a set to provide additional voices?
JR: Usually it happens through a wonderful woman by the name of Mickey McGowan. They call her and generally will ask for a certain person. I have been lucky that Pixar has chosen to bring me back each time. I have done most of their films with the exception of 2. Those couple films were shot out of the country and they needed specific voices for those shoots. I also have been lucky to do a lot of their shorts as well such as the ones with Mater from “Cars” and those for “Toy Story 3”. I have just been very lucky. I have been riding this wonderful train and having a ball until it stops.

MG: How did your involvement in “Akira” come about and what was that experience like?
JR: “Akira” was interesting. It was so long ago that I don’t remember it 100 percent but I do remember I had worked with Wally Burr once or twice before and he had this reputation for being a real man eater. Frankly I thought he was wonderful and it was great working with him. When I got cast I had no idea how big of a film it was or it was going to be. It was the biggest film in Japanese anime at the time and was like 60,000 frames per film which was unusual at the time. It was just myself, Wally and the engineer in the studio. We worked about three or four days and on one of those days a group of Japanese business men came in and sat stoned faced watching me. We had taken a break and if you saw what happened in a film you would think it was phony but all of a sudden these guys just started smiling and busting out cameras to take pictures. Wally said breaks over and the guys went right back to the way they were before. (Laughs) I also remember we were working on the big metamorphosis scene and it ended up being like 20 takes of me screaming and begging for tea and honey.

MG: Can you tell us about being credited sometimes under a different name?
JR: That’s my pseudonym. I once got a Los Angeles public library card under the name Stanley Gurd, Jr. because my card had run out and they wouldn’t give me a new one so I made up a name. Years ago a lot of anime was done under the table so people used different names. Stanley is actually the name of a nerd character I created similar to Pee-Wee Herman. I love doing the character of Stanley Gurd, Jr

MG: What is your inspiration when doing multiple voices on a project and how do you distinguish each one?
JR: It really depends on the character and what kind of personality he has. I grew up in East Meadow, Long Island and my father worked in Brooklyn so I had a wide variety of characters to choose from. My dad owned a small business and a lot of different types of people would call him some who were really weird. I also have relatives from all over the world so I borrow a lot from them and from people who I grew up with.

MG: How did you get the role of Larry Laffer in the “Leisure Suit Larry” video game?
JJR: That was another one that I auditioned for and had no clue really what it was. People told me it was a big gig and I guess it was in the fact that the game was well known but I was getting paid in those days scale or a little bit above so I didn’t make much off those cd-roms at all. I had a ball working with Al Lowe and he and I are still good friends. Al would let you ad-lib and I would just go crazy! Al would have to tether me down to stop me because you would just adlib your ass off! My wife likes to say she’s married to “Leisure Suit Larry” (Laughs)

MG: What was your involvement with “Jaws: The Revenge”?
JR: I was in the only “Jaws” film that didn’t make more than $10 at the box office! (Laughs) That was a looping gig. I don’t really remember what I did on it but, you look at a film after you have finished and you can tell if it’s going to be good or not. You could tell that one was going to tank. (Laughs) Another one I did which was actually my last gig in front of the camera was on “Baywatch”. They had a fake shark in that and they had a fake shark on that and it didn’t work half the time. They would say “ah it’s no big deal it’s just Baywatch.” (Laughs)

MG: Can you tell us about any current projects you are working on?
JR: I still go down and do work for Pixar and DreamWorks here in Los Angeles. I do a lot of commercial stuff lately. I also do a lot of work in Vancouver where I just did “My Little Pony”.