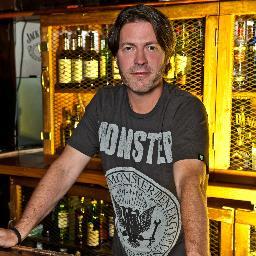 Don Jamieson is a veteran stand-up comedian who can be seen weekly on VH1 Classics popular television series “That Metal Show”. Along with co-host Jim Florentine and Eddie Trunk the trio spread the word of all things metal while incorporating in studio interviews with everyone from Zakk Wylde to Steve Harris of Iron Maiden. Media Mikes spoke with Don recently about his work on the show and about his upcoming comedy album titled “Hell Bent for Laughter”.

Adam Lawton: How did you first get connected with Eddie Trunk?
Don Jamieson: Jim Florentine and I were fans of Eddie’s radio show which is on here in the NY/NJ area. We usually always listened to his show on our way back from some awful comedy gig that was out in the middle of nowhere that we didn’t get paid for. The only solace we would have from those crappy gigs back in the day was to get in to the “Trunk Zone”. On his show Eddie would talk about all the bands that we grew up listening to and really loved. Eddie was just like as so we had to meet him. Today they call it stalking (laughs) but we basically just walked around some shows until we found him and we all ended up becoming best friends. It’s great to all be working together on the VH1 Classic show.

AL: What were the first ideas mentioned about doing the show?
DJ: After we had become friends with Eddie he would have us on his radio show as guests and we were basically doing what would become the television show however on the radio at that time. We just talked about music and sat in when there were guests. We broke each other’s balls then just like we do now and there was some good chemistry there. We figured we would try and find someone crazy enough to put this on television.

AL: What has fan reception been like since returning to New York for season 13?
DJ: We loved doing the show in Los Angeles and being recognized while walking up and down the Sunset Strip was pretty. However were all East Coast guys and we missed taping in New York. I look out in to the audience there and see a lot of the same people who I used to see at L’Amour’s in Brooklyn in 1986. It really is a lot of fun.

AL: Did the push to move back to NY come from you guys or from the fans?
DJ: The network controls everything. We may seem like we are in control of stuff but really we have less control than the Amish. (Laughs)

AL: You guys always seem to be having fun in front of the camera but can you tell us what it’s like behind the scenes?
DJ: There is a lot of farting going on. Not much else goes on other than listening to music while crop dusting one another. (Laughs) We usually go over notes a little bit but with all three of us being metal heads now for 35/40 years it’s easy for us to sit down and have a conversation with one another along with our guest/guests. We like to just try and stay loose. We break each other’s balls and have a good time while talking about music.

AL: Has there been one guest in particular that has stuck out as a personal favorite of yours?
DJ: There has been a bunch. I will always love the stuff we did with Brian Johnson, Lemmy and Alice Cooper. I love the classic guys as those are the bands I came up with. Lemmy is seriously like my idol! I wish he would have adopted me. As far as the television show goes I love guests who are very outspoken and who tell it like it is. The season we had Ted Nugent on and to me that’s the ultimate guest. That guy holds nothing back and shoots straight from the hip. Sometimes guys like that can be polarizing but at the same time you know you are going to watch. You can’t wait to see what they are going to say next.

AL: How much of the show would you say is scripted?
DJ: We never plan what we are going to say to one another. That was the tuff part about putting the show together was how three people were going to interview one guest. Luckily we had worked out some of those kinks on the radio over the years. I can look out the corner of my eye and see if Jim or Eddie has a question they want to ask. We have some good non-verbal cues of how we are going to sort things out. We are fans just like the people watching so the questions we ask aren’t scripted. Hopefully we are asking the stuff that fans like us want to know. My favorite interviews are always the ones where you don’t get to the questions you want to ask because things ended up going a totally different but cool way. We just save those questions for when the guest comes back next time.

AL: Can you tell us about some of the things you have going on outside of the show?
DJ: I have my second stand-up album coming out March 18th on Metal Blade Records and it’s called “Hell Bent for Laughter”. This is my second album with them and I did a lot of hard rock and metal jokes as compared to my last album. That has become such a big part of my life and it would be hard to get up on a stage and not talk about that stuff.

AL: Being that you have pretty close ties to the hard/rock metal community do you find yourself checking your material on that subject a little more now than in the past?
DJ: If something gets a laugh on stage I am going to keep doing it. When I did the Orion Festival with Metallica I did some jokes about them with James and Lars right there. If the jokes funny it’s funny and it’s nothing for anyone to get offended by. I think most people know that this stuff comes from the heart. When you are with your buddies you break each other’s balls. That’s how you show affection for one another. You never say just go up to your buddy and say “I love you” unless your drunk in a bar somewhere. (Laughs) You bust on them for 10 minutes and they know you care.

AL: You and the other guys from the show have started doing some live shows together. Do you have any of those coming up in the near future?
DJ: Jim, Eddie and I go out and do these really fun stage shows. Eddie tells a bunch of hilarious rock and roll stories and Jim and I will do some stand-up. We also do some Q&A with the audience which is a lot of fun. Sometimes we bring up special guests if the situation occurs. If people want to find out where we are going to be they can check out my website at www.donjamieson.com or Follow me on Twitter @realdonjamieson