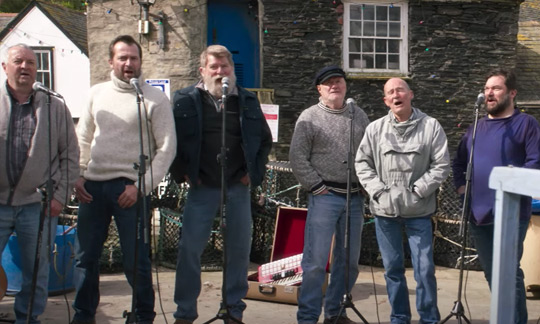 A hot shot London music agent named Danny (Mays) becomes entangled with some seaside villagers when he is ditched by his stag party buddies in Chris Foggin’s Fisherman’s Friends. Loosely based on a true story, the Fisherman’s Friends are a group of local musicians that Danny discovers singing sea shanties. Under peer pressure from his pals, Danny decides to ingratiate himself with the band in order to secure a record deal to take home. Along the way, he strikes up a romance with one of the group’s daughters and entrenches himself in local politics. With its picturesque setting, its city folk-country folk clashes and its romcom meet cute, Fisherman’s Friends has all the hallmarks of well, a Hallmark movie! Without the pesky Christmas baggage. Whether you’re on board with this style depends upon whether you’re up to this level of coziness and predictability.

The flimsy setup to get city boy Danny stranded in Cornwall happens after his clique’s bachelor party yachting excursion falls through. Once it becomes clear they won’t be embraced by the locals after their drunken paddle boarding lands them in need of rescuing from the town’s fishermen, the trio of Londoners hightail it out of there leaving Danny stuck as a joke. It’s a pretty drastic prank but seeing as it passes the movie over from a carload of annoying bro caricatures and into the wonderfully capable and more weathered hands of cast like James Purefoy and David Hayman, the brevity is welcome.

There is a real warmth to the Cornwall setting and Foggin loads his soundtrack up with the Fisherman’s Friends sea shanties to keep everything pleasantly humming along. Sam Swainsbury as Rowan, the youngest member of the band, particularly shines in some of his solos as well as in playing the owner of the town’s financially struggling pub. His plot line gives the movie some needed stakes where the Fisherman’s Friends’ musical dealings are concerned. Meanwhile, the less defined village characters all manage to get their quippy jabs in at Danny in ways that are sure to wring a smile or pleasant chuckle from most viewers. It’s also nice to see Daniel Mays take a turn at a contemporary leading role seeing as I’m primarily used to seeing him pop in and out of so many period blockbusters.

When the film veers from the musical talent into Danny’s romantic relationship with Alwyn (Tuppence Middleton), the daughter of Purefoy’s character, you do lose some of that momentum while awaiting the fate of the titular band. Not least of all because one senses this movie will inevitably end happily so the requisite romcom roadblocks feel all the more rote. That said, even if you find yourself drifting somewhat, the kernel of the real life underdog musicians’ tale is compelling enough and the soundtrack is buoyant enough to keep it all afloat.