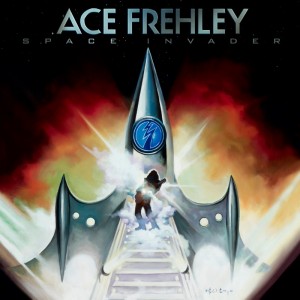 Original Kiss guitarist and recent Rock and Roll Hall Fame inductee Ace Frehley is back with a brand new full length studio album appropriately titled “Space Invader”. The album is being released via eOne Entertainment and features 11 brand new tracks along with Frehley’s beefed up rendition of the Steve Miller Band classic “The Joker”.

Over the past few years Ace has seemed to have gone through a period of career revitalization. First was the release of “Anomaly” in 2009, which was Frehley’s first solo release in over 20 years. Shortly after that was the release of his first autobiography titled “No Regrets” and of course we all know about the controversy surrounding Kiss’s induction into the Rock and Roll Hall of Fame. This brings us to Frehley’s newest musical offering “Space Invader”. The album takes a much grittier approach than Ace’s previous release yet is still classic Space Ace all the way.

Tracks such as “Space Invader” dominate your speakers with groovy rhythms and snappy vocal passages that are reminiscent of Frehley’s early solo works. As the album progresses Ace continues to prove that even at the age of 63 he is still more than capable of bringing rock and roll to the masses. The track “Change” was probably my most favorite off the album as it features a really big sound complimented by one of the better solos I found on the record. Another notable track worth checking out was Ace’s rendition of the Steve Miller Band song “The Joker”.

Even though I have heard countless covers of this song Frehley’s interpretation was fresh and fun making it a great summertime song to throw on at your next cook out. Both Kiss and Non-Kiss fans will want to check out this release as it’s a fun listen that has a little something for everyone.