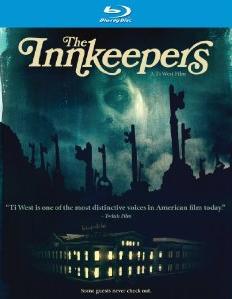 The director, Ti West, has recently become one of my favorite new horror directors. I ignore the fact that he directed the horrendous “Cabin Fever 2”, which he has since disowned, and remind myself that he did the absolutely amazing “House of the Devil” from 2009. Such a brilliant film if you have never seen it, it is a must watch. This film doesn’t quite capture that same brilliance but is a fantastic return of the slow-burn horror genre. Props go to the amazing Sara Paxton’s (redeeming herself for “Shark Night”) for providing a simple amazing and haunting performance.

The film focuses around the closing of The Yankee Pedlar Inn, which has been open for over 100 years. We meet the remaining employees, Claire (Sara Paxton) and Luke (Pat Healy). They are determined to prove that the inn is one of the most haunted hotels in New England. The pair of “ghost hunters” begin to explore but are met with very strange and creepy events that will uncover many unexplained events of the inn’s history.

The video on the Blu-ray is dark in parts but works well with its high def 1080p resolution and presented in 2.40:1 aspect ratio. The Blu-ray packs an eerie DTS-HD Master Audio 5.1 track and works perfectly with the score. I just wished there was more jumps and spooks to have it take advantage. It is definitely recommended, as stated in the menu, that you should play this film loud.

The special features are a bit disappointing overall though unlike the film. There is a very short featurette “The Innkeepers: Behind the Scenes”, which focuses on the real location of Yankee Pedlar. There are not one but two audio commentary tracks included. The first features director Ti West, producers Peter Phok and Larry Fessenden, and 2nd unit director/sound Graham Reznick focuses heavy on production. The second features Ti West and stars Sara Paxton and Pat Healy, which it is more light and fun. Lastly there is a trailer included. 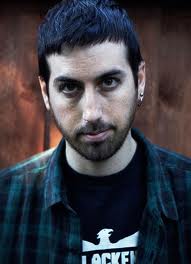 Ti West is a name you should know if you are a fan of the horror genre. He  is known best in the genre for writing and directing the amazing film “The House of the Devil”. His new movie from Dark Sky Films is called “The Innkeepers” and is being released on Blu-ray/DVD on April 24th. Media Mikes had a chance to chat with him about that film and what he has planned next.

Mike Gencarelli: How did you come with the idea for this classic ghost story “The Innkeepers”?
Ti West: I hadn’t made a ghost story, so I wanted to do that. When we shot “The House of the Devil”, we lived in this hotel and all this weird stuff happened during that time. I didn’t think anything about it because I was just stressed about making the movie. So about a year later, I started thinking I wanted to do a ghost story and I thought to myself, what if it took place in the hotel we lived it and just went back and shoot it there. I know it already exists in Connecticut and I know there is a tax return for making movies there. It worked out well. I wrote it before asking them and then I paniced, in case they said no. Then I would have wrote a movie about a place we couldn’t shoot it. It would be writing a John Wayne movie, then being fucked cause you can’t cast him [laughs]. Thankfully, they said yes and the rest happened very quickly.

MG: Sara Paxton nailed this role, how did you get her involved with the film?
She came through the normal channels, just auditioning. I didn’t know the rest of her work. when she came in to meet, she was just so awkward, goofy and clumsy. I never would seen that coming and I found it so fascinating and charming. Then I went and watched her movies and she wasn’t like that at all. I wanted to exploit that. That made me push for her. I knew she was doing to be very relatable in the role.

MG: What was your most difficult task in making the film?
TW: This one was oddly pretty easy. Which means the next one, I will be completely screwed [laughs]. We made it so quickly, so that was hard, there was never a moment to breathe. The saying during shoot was that we were just waiting for the other shoe to drop and it was like that the whole time. It never really dropped. Maybe since I had two really hard experience before this and then “House of the Devil” was just really hard to make that movie, I think I was just expecting the worse. This was just so much easier.

MG: The film takes it slow in the beginning but delivers in the end, tell us about that tactic used in a few of your films?
TW: I don’t think about it so much. To me it just seems like the only way for me to make the movie. when its done everything uses the term “slow-burn” and I am like “really”? I understand what they mean but for me I see it as you need to have all this done to make it work, so I just do it. It is like hearing you voice on tape and thinking you don’t sound like that…but you do sound like that. I fell like that might be the way with me and the way I make movies.

MG: What do you enjoy most about working in the horror genre?
TW: It’s been good. I feel like I got a few movie in me and then I got to take a break. I don’t to start repeating myself. The last movie I wrote, I remember writing “She slowly walks down the hall” and I thought to myself, “I can’t believe I am writing this again”. What has been good for me in the genre is that I feel it is an experimental genre. Most people do the same thing over and over and I don’t necessarily like doing that. It is nice for me to make six horror movies in the last six years and they are all very different. The style is different. The stories are different. You can do all sorts of different stuff in the genre so I think that is appealing from a filmmakers perspective.

MG: How do you compare “The Innkeepers” to your past films like “The House of the Devil”?
TW: Once the past films are done, I really don’t think about them anymore. “The Innkeepers” feels like the only movie I have made right now because it is all around me. I work with the same crew already, so for me I think of it as those experience that all of us had a friend then more the content of the movie.

MG: What can you tell us about your upcoming films “V/H/S” and “The ABCs of Death”
TW: Yeah, I did those two anthologies last summer and then both come in this Fall. It’s weird, I didn’t think about myself as an anthology person but I liked the people that were working with. They told me I could get this much money and I could do out and make whatever I wanted. That is a really appealing offer. The only instructions were that with “V/H/S”, it has to be aspects of found footage and horror and that was it. I was able to cast whatever I wanted and make whatever I wanted. with “The ABCs of Death”, they gave us a letter and left me alone. We had to deliver it by this date and we had this much to do it with. It is certainly not a lot of money but if you are smart with it, it can work out well and worth it.