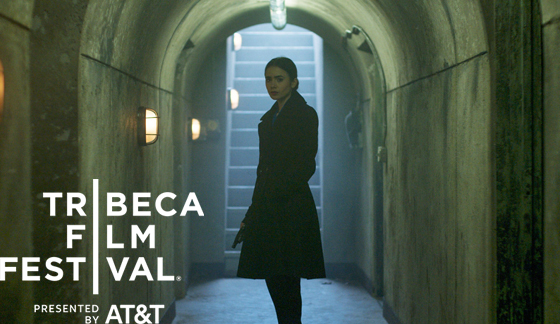 Note: Inheritance was due to make its world premiere as part of the 2020 Tribeca Film Festival’s “Spotlight Narrative” slate. Though the 2020 Festival was officially postponed due to ongoing pandemic precautions, online screeners and the fest’s press library mean we can still offer coverage of this year’s selections while looking forward to getting back to the fest in the future!

Early on in Inheritance, the will of deceased banker Archer Monroe (Patrick Warburton) is read out to his district attorney daughter Lauren (Lily Collins) and her congressman brother William (Chace Crawford). While the campaigning son takes a massive twenty million dollars, his sister “only” gets one million. If you think that’s the main source of strife in this family then oh boy, strap in because that difference barely scratches the surface of Lauren’s problems. Director Vaughn Stein’s new thriller releasing on VOD this week after having been a 2020 Tribeca Film Festival selection, takes a hard turn into its potential-horror setup but doesn’t fully embrace it with leads who can’t sell it.

The monetary discrepancy between Lauren and her brother quickly gives way to Lauren receiving her actual inheritance in the form of a mysterious key and a video from her late father urging her to keep the truth buried. Not to be too cynical but it’s pretty expected that a wealthy family like these Monroes–populated with bankers, lawyers and politicians–is going to have its share of skeletons in its closet. Stein’s film does this cliché one better by Archer leaving his daughter a full grown man chained up in a bunker. Thanks, dad. The bunker man is named Morgan (Simon Pegg) and seems to know everything about Lauren who desperately wants to know the whys and hows of Morgan’s disgusting situation. More than that, Lauren must face a crisis of conscious whether to heed her father’s will, especially in the middle of her brother’s re-election or release the bedraggled, pitiable Morgan with his trove of family secrets.

Simon Pegg has long been one of my favorite actors, whether in leading the “Cornetto trilogy” or popping up in larger fare like Star Trek or even better the Mission: Impossible series, but saddled in this film with the heavy wig and grime of Morgan’s imprisonment and, worse, a ropey American accent, and he is utterly wasted. The main tension in Inheritance should come from whether Lauren can muster enough pity for Morgan to release him or Pegg can be sufficiently menacing in his blackmail of the Monroes to achieve his ends. But in their contained scenes, the dynamic never coalesces into real tension. Where you’re expecting someone to actually strike, they just keep talking in circles. And I can’t underscore enough how badly Pegg’s US accent hobbles how threatening his character could have been. There are later parts in the film where I imagine Pegg was really having fun with it, but too much of the runtime for his character is leaden stuff. Collins, 31, for her part as a DA in Manhattan is much too young to hold such a role and comes off as someone playing dress up. It was hard to take either of them seriously in these parts.

For a movie where the crux of the problem is a man chained up in a basement, Inheritance is just overall way too bland. Outside of Pegg and Collins, the Monroe family and their posse come off as stock soap opera characters. Chace Crawford, so good on “The Boys,” is as ridiculous as a hot-shot congressman as Collins is as the DA. Ultimately their rich people problems–and secrets–aren’t as shocking as the film wants them to be.