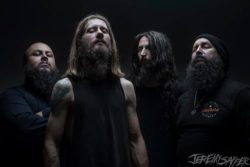 Richie Cavalera is the vocalist for the heavy metal band Incite. The Phoenix, AZ based group is set to release their fifth full length studio album on January 25th titled “Built to Destroy”. Media Mikes spoke with Richie recently about the upcoming release, their new video and, the groups subsequent tour which kicks off on January 25th as well.

Adam Lawton: What can you tell us about the bands upcoming release “Built to Destroy”?

Richie Cavalera: We have two tracks from the album out now. The first is “Ruthless Ways” and then we have a video for the title track “Built to Destroy”. This was a killer record to make as it is the third one with this same lineup. We have been touring a lot and getting more comfortable with one another so I think that helped the process quite a bit. When people hear it they are going to know what it’s like to hear us live as I think this album captures our live sound quite well. There are lots of great solo spots as wells as two guest spots. One features Kirk Windstein from Crowbar and the other has Chris Barnes of Six Feet Under. From beginning to end this is a no bullshit record.

AL: This being your third release with the same lineup was there anything different you set out to accomplish?

RC: I think the biggest thing right off the bat was that we let Dru (Rome) our guitarist really write. In the past we had always pieced things together but for the first time we sat back and let Dru present us with full songs. It was a cool move which added a killer feel. People will notice that guitar work on this album is like nothing we have ever done before. Seven or eight of the albums eleven songs have solos and there is a lot of dynamic. This album was a lot of fun to make.

AL: What was it that led you to the decision of having Dru take control of a bigger part of the writing?

RC: I think there were quite a few things that led us to that decision. In the past we had done a lot of the email stuff by just sending parts back and forth to one another. We would assemble songs from riffs. This time things were presented as full songs. We had been touring a lot so a bunch of the work was done in venues and dressing rooms. Basically where ever we could get work done we did it. I think that helped add to the albums live feel. Switching things up worked out really well.

AL: Even though the process worked well for you did you find it difficult to write/record while on the road?

RC: It was defiantly difficult. At this stage of all of our lives there is a lot going on and there isn’t ever a real stopping point. The cycle between recording and touring never seems to end so you just have to go with it. We found a time where we were stopped and just went full bore while keeping our fingers crossed that no tours would come up. Thankfully we were able to get everything done the way we wanted it.

AL: What was it that made you decide to work with producer Steve Evans again?

RC: We had known him from working on our last album “Oppression”. Steve has worked on so many great albums so when we got to work with him on the last record we were very excited and it was just a great time. We knew going into the record for the new record time was going to be a big factor so being we were comfortable with Steve we wanted to work with him again. He actually came out to Arizona and sweat it out with us this time around. To be able to have a good bond with your producer really helps the process.

AL: Can you tell us about the video for the title track “Built to Destroy”?

RC: That song is the opening track on the album. It is a full on explosion of everything this band is. We feel we are at a point to take on the metal world and be that band to help carry the metal torch. We have always done crazy videos in the past but this time we wanted to showcase what the band is about. I think the video shows a great image of the band. We are rocking out with nothing else crazy going on. This is actually one of two video we shot. The other is for the song “Resistance”. We shot that one on skid row in Los Angeles and I think it will be out around the time the album comes out.

AL: Can you tell us about the upcoming tour which starts on the same day the album releases?

RC: We lucked out and things lined up quite nicely with that. We will be out opening for Kataklysm and Soulfly. We haven’t toured with those guys since we first got this band going. The tour is going to be a lot of fun and we will be going all over. I think there are around twenty eight shows scheduled on this run then we head over to Europe with Septic Flesh and Krisiun. We are also working on some things in June and July here in the states before heading back to Europe for the summer festivals. This will be our first time getting to do the big festival shows so to be able to play in front of twenty five thousand people is going to be amazing. We have been dreaming along time about what we could in front of that many people and now we are finally going to be able to do it.

For more info on Incite you can visit their Facebook page at https://www.facebook.com/INCITEband/