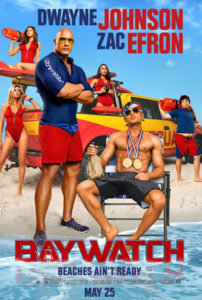 Before I begin I want to tell you a story. I’ve only seen one episode of the “Baywatch” television show. It was at my friend Marty Kircher’s house and I couldn’t believe how someone of his age (late 30’s) could find the show interesting. The part I remember most was a scene with David Hasselhoff climbing on board a boat which had a man tied up in the middle of it. “What the hell is he doing,” I asked, “he’s a damn LIFEGUARD!” As if on cue, the Hoff looks into the camera and says, “I haven’t seen this much C-4 since my time in the Navy Seals.” Marty turns to me and says, “See! He was a NAVY SEAL!” Thankfully the makers of the new “Baywatch” film don’t take their movie as seriously as Marty would.

Mitch Buchannon (Johnson) is the main man on the beach. With summer starting it’s time for Mitch and his fellow lifeguards to pick three young wannabes to learn the ropes. He is surprised when former Olympic swimmer Matt Brody (Efron) shows up and announces he’s now a “part of the team.” Stuck with Matt, Mitch also chooses Summer Quinn (Daddario) and Ronnie Greenbaum (Jon Bass) to complete his trio of newbies. Summer seems to have the skills necessary to save lives. Ronnie…well, Ronnie has heart! And that’s all you need to be a part of “Baywatch!”

Consistently funny with a few slow spots, “Baywatch” thankfully follows the formula that other television-shows-to-movies like “21 Jump Street” have in that it doesn’t take itself TOO seriously. Leading this charge is Johnson, who seems to want to let us know that it’s OK to laugh at things we find funny. And Johnson has fun as well, making fun of the new guard. Brody, who is surely inspired by American Olympian Ryan Locte, has rubbed Mitch wrong and Mitch confirms this by calling Brody pretty much everything BUT his name. One Direction. Bieber. High School Musical. Brody answers to all three and more. Completing the team are Kelly Rohrbach as C.J. and Ilfenish Hadera as Stephanie. Together they must investigate the recent growing of a new drug kingpin without attracting the wrath of the local police, who look upon the lifesaving gang with spite.

Both Johnson and Efron are well cast. I don’t know why but every time Johnson came on screen I began thinking about his character, Maui, from “Moana.” Efron, who reportedly exercised himself down to 5% body fat, plays up the “swimming Bad Boy” character for laughs, though as the film progresses you do begin to feel a little affinity for him. The supporting cast is also funny but I would be remiss if I didn’t give a special shout out to Jon Bass, who steals the film as Ronnie. And if you fans of the television series keep your eyes peeled, you may spot a familiar face or two.

All in all, a fun film you should wait 15 minutes after eating to see!