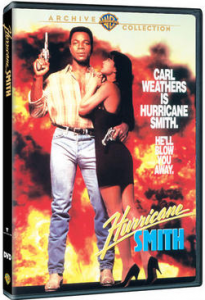 I can’t explain why but I am big sucker for cheesy 80/90’s action films. I can’t help it. It is like an addiction. Plus who doesn’t love Carl Weathers. Before this film, I grew up watching him as Apollo Creed in the “Rocky” series and Dillon in Predator. Of course everyone knows him as Chubbs Peterson from “Happy Gilmore”. He is just such a kick-ass guy and he does just that in “Hurricane Smith”. Like I said, this movie screams 90’s action but that is what makes it so good. It is not trying to hide anything. If you feel the same way that I highly recommend you picking up this DVD.

Official Premise: He’s been taken for a ride, roughed up and dumped in the gutter. But that won’t stop him. He’ll tear through Bribane, like a…well, his nickname is “Hurricane”! The man who put the Action in Jackson now puts the Hurricane in Smith. Determined to locate his sister, Billy travels from small-town Texas to Australia’s teeming Gold Coast. There, his search plunges into the street war of drug mobsters who’ll soon wonder what hit them. Jurgen Prochnow (Das Boot) costars as stone-cold evil gangster Charlie Dowd. And Cassandra Delaney is the good-hearted hooker who helps Billy as he blasts through a Down Under of high-rise chic and quaint Victoria buildings, of glorious beaches and back-alley gambling. For action that’ll blow you away, brace for Hurricane Smith.

Warner Archive is behind this release and it is the first time that “Hurricane Smith” is getting a DVD treatment. This film has been newly remastered and looks pretty awesome, especially for a 90’s film.  The film comes with an 1.85:1 aspect ratio and looks very impressive. The audio included is also an impressive Dolby Digital track, it works for the film’s action and cheesy yet funny dialogue.  There are no additional special features included here. I just need to say that Warner Archive deserves an award for giving these great titles some love and attention that would otherwise just remain stuck in the VHS age. 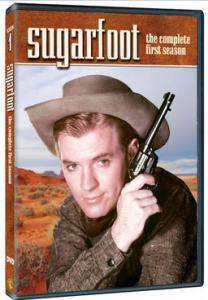 I have to admit, I have never been the biggest fan of the Western genre.  In fact, “Sugarfoot” was never on my radar in the past.  I have heard of it but never saw any episodes. Will Hutchins really does a great job on his role and I really loved that character. The show itself is filled with guest stars right from the pilot including Slim Pickens, Sheb Wooley and Dennis Hopper as Billy the Kid. This show has also brought fame to many other well known talent including Bob Steele, Guinn Williams, Don Barry, Paul Fix, Dan Blocker, Pernell Roberts, James Garner, Charles Bronson and many more.  “Sugarfoot: The Complete First Season” features the first 20 episodes of the series over this 5-disc set.

Official Premise: Based on The Boy from Oklahoma (1954), an easygoing Western starring Will Rogers Jr., Sugarfoot debuted on ABC-TV on September 17, 1957, where it alternated every other week with Cheyenne. Will Hutchins ably ambled into the boots of Tom Brewster, a peaceable lad aiming to get a law degree via a correspondence course, with a nose for danger and a heart of steel. Sarsaparilla sipping “sugarfoot” Tom has one major difference from the likes of Layne and Bodie, however, he would rather reach for his thinking cap than for his pistols (Not that he can’t ping a peso from twenty yards, mind you!

Since this first season DVD release only includes 20 episodes, this show ran for four seasons with nearly 70 episodes. So I assume that Warner Archive is planning to releases the remaining seasons as well in the coming months.  So if you are a fan of this classic Western show then this show be music to your ears.  The episodes looks great for a show that is nearing 60 years old.  I am not aware if Warner Archive did a full restore on them but I was impressed enough.  Even though Westerns are not my cup of tea, I look forward to the rest of the seasons just to enjoy the timeless action and amazing cameos.