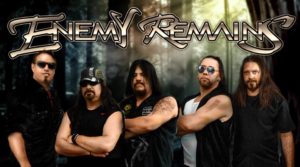 Global Music Award-winning heavy metal group Enemy Remains are set to release their second full-length album on January 20th titled “No Faith In Humanity”. After a lengthy hiatus the band which features original Fates Warning drummer Steve Zimmerman along with Tommy Blardo, Frank Morin, Scott Kadish and Jeff Curtis are ready to unveil their latest creation. Media Mikes had the chance recently to speak with Tommy and Frank about the new albums creation and what it was like reforming the band after their extended break.

Adam Lawton: Can you tell us about the work you have put in on the new album “No Faith in Humanity”?

Tommy Blardo: Funny thing about that, when we signed with Skateboard Marketing we didn’t have one track written for the album, zero, not even ideas. We put a single out, “No Faith in Humanity”, and that’s all we had at the time. It was pretty scary but, I think when you set deadlines it motivates you. Everyone worked really hard on this new album. I wanted to take the band in a whole new direction, new line, new sound, new writing style, new everything! We kind of things a facelift and I think we nailed it.

AL: What were the first couple of writing/rehearsal sessions like after getting back together from your hiatus?

TB: Honestly it was weird, with Steve coming from Fates Warning and playing old prog metal stuff, it was a big change for him, but he was willing to adapt to the new modern style we are going for with hooks but still keeping his roots grounded musically with the off time changes. With the addition of new vocalist Frank “Heretic” Morin, the musical transition seemed to work very well. What Frank has brought to the table just takes so much weight off Steve and I and it really enforces the new sound we were going for.”

AL: At what point did new members come into the picture and, how have they further shaped the new direction of the band?

TB: Frank was added first, I knew we needed a vocalist that could really catch the attention of the listeners with that “radio voice” as they call it – to really fit the new style we had in mind. Scott Kadish (guitars) and Bobby Byrk (keyboards) were added a little later, but were totally involved in the whole writing process. I’ve got to say, this is the strongest line up of professionals we’ve ever had. Band practice has become fun again.”

AL: What can you tell us about the two tracks the band has released thus far from the album?

Frank Morin: I can tell you they were a pain in the ass! Tommy and Steve first approached me with the music to “No Faith In Humanity” and I got really pumped! I had been waiting to jump into a rock/metal project of this caliber for a while, so that song kind of wrote itself based on how I was feeling about the world and the people in it. “Trust in No One” was a little more difficult. It was the first time I played with progressive riffs in a 5 count. It took Tommy and I about an hour to write the hook. Both tracks, like the entire album, touch on personal issues from a singular point of view, though we all share the same ideologies on them. Like the rest of the album we wrote all the music based on the concept, and I just started with the lyrics.

AL: Do you have any touring or performance plans in place to support the release?

TB: At this point we have full press and radio campaigns hitting hard the first week of January and the release of the album is on Jan 20th. After that we have plans to tour the east coast, mid-west and extended dates throughout the west coast by summer. After that hopefully we will be jumping on as a support act for a national artist!

For more info on Enemy Remains you can check out www.facebook.com/enemyremainz