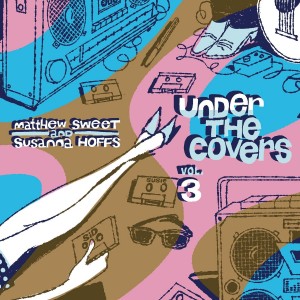 Singer song writers Mathew Sweet and Susanna Hoffs are back with their 3rd installment of cover albums titled “Under The Covers Vol.3”. Like their previous two compilations which covered songs from the 60’s and 70’s the latest in the trilogy tackles the widely popular 1980’s. Produced by both Sweet and Hoffs the album is being released via Shout Factory and feature 14 tracks ranging from the obscure to the more popular of 80’s tracks.

When you hear the name Mathew Sweet and Susanna Hoffs it’s hard not to envision the sounds of Sweet’s classic album “Girlfriend” and the countless hits Hoff has sang/played on with her former group The Bangles. Though the two are quite different it’s easy to assume they wouldn’t mix very well however the result is the exact opposite. Since the duo’s first covers album “Under the Covers Vol. 1” in 2006 the two have been steadily releasing more work together. The latest “Under the Covers Vol.3” brings the listener back to the age of stone washed denim, hyper color t-shirts and teased hair. Though Sweet and Hoff chose to cover a few more obscure tracks like R.E.M.’s “Sitting Still” and “The Bulrush” by The Bongos each track is given a fresh spin featuring bubbling pop type arrangements making the album one of those that you can throw on and kick back to while looking through your old year book.

My favorite of the 14 tracks were the renditions of Tom Petty’s “Free Fallin” and the always enjoyable Go-Go’s tune “Our Lips Our Sealed”. Even though both of those tracks have had their fair share of reworking by other artists these two renditions were packed with plenty of appeal. My biggest complaint about this album was again that some of the songs were a bit obscure for my liking however I certainly cannot fault the performers for wanting to do something different from an era over flowing with tons of great music.