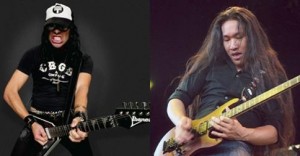 The power metal band DragonForce who burst on the music scene in 2003 with their debut album “Valley of the Damned” are back with a brand new studio album titled “Maximum Overload”. The album features 9 original tracks along with the bands unique take on the Johnny Cash classic “Ring of Fire”. Media Mikes recently spoke with the bands guitarists Sam Totman and Herman Li about the albums creative process, the albums guest vocalist and the bands upcoming tour plans.

Adam Lawton: Can you give us some background on the new album and the story behind its title?
Sam Totman: Whenever we start any album we just start by writing what we think sounds cool to us. Everything else like song titles, album title and cover art all come after that. This one wasn’t any different. We wrote the music first and then the lyrics and then came the title. We chose “Maximum Overload” because it describes the music much like our previous releases. At the same time we had the idea for the cover art which depicts a person being hit with information from every angle much like how we are bombarded with information from television, internet and phone on a daily basis. It’s hard to ignore even for someone like myself who doesn’t really use a lot of that stuff. The title kind of ended up having two meanings so it worked out well.

AL: With Sam and Frederic taking on the writing aspects of the album, at what stage of the process did you come in Herman?
Herman Li: Sam and Fred first started writing together in France. Sam actually worked out the music on his own and then when he had all the structures laid out we started work on the demos in London. Our producer for the album was Jens Bogren and he helped as well.
ST: It was a pretty cool experience because in the past this was something we had never really done before. I would just do demos on my own and then I wouldn’t want anyone to touch them or contribute. It was cool working with someone else. I would come in with a song and then give it to the guys to add their pieces to it whether it is keyboards or Herman’s crazy guitar noises and such. Previously we just always wrote songs individually. Working together certainly brought a different element to the new record. It’s still very much a DragonForce album but there is a lot of cool new things going on which I really like.

AL: Do you guys often do a lot of pre-production then prior to entering the studio?
HL: In the past we did very little pre-production. If you listen to some of those previous tracks the demo versions are quite a bit different. There might be just a drum machine with a chord and melody laid down. Some of the songs would be quite unrecognizable. On the new album we actually had vocals recorded and some demo solos as well. By working with Jens we couldn’t just send him a pile of ideas and expect him to make a song out those. We had to give him a clearer image so that he could help us make the tracks stronger.
ST: With my demos I know what’s going on with them but someone looking at them from the outside in isn’t really going to understand what I was thinking. I often would just throw out some chords and not really try to play all that well. Demoing the songs with proper vocals certainly helped us give Jens tracks that were a bit more complete.

AL: Can you tell us about Matt Heafy’s appearance on a couple of the albums tracks?
HL: We had been working on the songs and we got to a point where we thought they needed something more. We were thinking of wanting different backing vocals on a couple songs and Matt’s name just happened to come up. It’s wasn’t planned ahead or anything like. We sent the tracks to Matt and kind of explained what we needed. Matt went above and beyond for us and did a bunch of different styles for his parts. I was amazed when I heard all of what he did I have to thank Matt for his work.
ST: We knew what we wanted but we told Matt that he could add whatever else he wanted to add. Honestly I think we thought he was just going to do what we were looking for and be over and done with it. When we got the tracks back it was totally cool because he gave us so many different things to work with.

AL: Tell us about the decision to cover Johnny Cash’s “Ring of Fire”?
ST: It was just fate. We had said that covers were something we had never wanted to do. I have heard so many cover songs over the years that they tend to become quite boring. That’s not to say people shouldn’t do them but it’s not really my personal taste. 10 years now into our career we thought it would be fun to do a cover song as people had never heard us do one before. We wanted the song to be different and fun. It would be boring to just go and cover another metal song where it virtually sounds the same as the original. I heard “Ring of Fire” on the television one day and could envision the vocal line in our style. I thought the song could really work so we made a couple small changes and put our stamp on it. We want people to like it for being a good song and not as something that’s a gimmick.

AL: The band released a video for the song “The Game” back in June. Are there plans to release anymore in the coming months?
HL: We have plans for another video but I don’t think that is going to be done until the album has been out a little bit. We haven’t shot anything yet but possibly towards the end of the year is when we are thinking of doing another. It took a lot of arguing to figure out which song we were going to use for the first video so we have to plan for that as well. (Laughs)

AL: What are the bands current tour plans?
HL: We will be starting the tour on September 18 in the UK. That’s about a month after the albums official release. We wanted to start over in the UK this time around because the last two albums we our tours in the States. The UK fans were always asking why. This time we figured we better start in the UK so we don’t make anyone mad and we can keep getting free beer every now and then. (Laughs) US fans will want to keep their eyes open as we are working on putting together a run in the States.