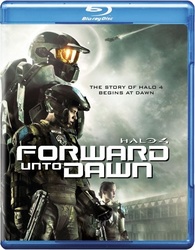 Who doesn’t want a live-action movie for “Halo”? I think it is every fans dream. Though if you are looking for the action-packed FPS web series for “Halo”, you might be a little disappointed with “Halo 4: Forward Unto Dawn”. But it does tell a great story and sets the stage well for “Halo 4”. Remember it is a web series, not a $100 million feature. It is on a small scale but really makes the most of that scale and still aims to deliver the world of “Halo” quite well. Of course Halo’s Master Chief shows up and is played by Daniel Cudmore (Colossus, X2: X-Men United) and voiced by Steve Downes, of course. Anna Popplewell also has a nice role from “The Chronicles of Narnia” series. The series premiered on Halo Waypoint and Machinima.com this past October and was split into five-parts. If you enjoyed the series, then the Blu-ray is definitely worth the purchase just for HD presentation and, most importantly, the extras.

Official Premise: Set against the backdrop of a United Nations Space Command (UNSC) military academy, a group of cadets are training to be the next generation of leaders in the UNSC’s ongoing war with insurrectionists in the outer colonial planets. Among these cadets, Thomas Lasky struggles with his doubts about this war and with the burden of expectations he may not be able to carry. As Lasky comes to terms with his potential as a military leader, the terrifying alien alliance known as the Covenant arrives and threatens to destroy everything he knows. When Lasky is rescued by the Master Chief, he must decide what it means to be a hero. “Halo” fans who experience Lasky’s thrilling origin story in “Halo 4: Forward Unto Dawn” will be rewarded with special insights into the story of “Halo 4” and the “Halo Infinity Multiplayer” experience.

The Blu-ray presentation is really great. Fans will be able to enjoy the entire film uninterrupted in all its 1080p glory. There is also a sharp DTS-HD Master Audio 5.1 track for the action. Watch out for those whizzing gun shots! The Blu-ray also comes with over an hour of special features, including exclusive behind-the-scenes featurettes. I really enjoyed both audio commentary tracks as well. The first is from the director Stewart Hendler and the second was by 343 Industries. Both are highly recommend, though the second I hold a bit higher. These are a must for any “Halo” fan. Also there are deleted scenes, storyboards and concept art included. All this will satisfy any fan of the series for sure! Lastly, keep an eye out for many Easter Eggs included throughout! 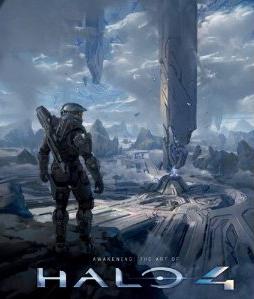 When it comes to video games, “Halo” is definitely the master chief of them all.  “Halo” has become such an iconic franchise over a short period of time.  “Halo 4” is the latest blockbuster installment, which is set to change history and re-define gaming. The story is set in the aftermath of “Halo 3”, it marks the beginning of a new trilogy as the Master Chief confronts an ancient evil that threatens the fate of the entire universe. In this book we get a glimpse into the beginning of this new trilogy within a stunning array of concept art, character sketches and much, much more. If you are a “Halo” fan, this is the holy grail of kick-ass books that you need to own for sure.

From the minute I opened this book, I was flooded with colors and amazing images.  It is one of those books that you literally cannot put down once opened.  Every page – every chapter is better than the next.  “Awakening: The Art of Halo 4” will satisfy all give gamers, whether they are hardcore or novice.  This book contains an in-depth look at the behind-the-scenes of how the stunning worlds of “Halo 4” were created. Fans of the series don’t fret since this book is also packed with some great commentary from the art director and game designers, so there is plenty of insider goodies.  We mentioned concept art and character sketches above, that is one the tip of the iceberg.  There is very detailed environments layouts, as well as an additional section on the forthcoming multiplayer game.

Author Paul Davies is definitely the right man for this job.  He is a crazy Halo fanatic (just like us) and has worked in gaming journalism for twenty years, where he has written and edited magazines and websites including Official Nintendo and Computer & Video Games. He wrote this book as a fan and therefore fans are going to really did it.  I read a lot of “art of” books and this one literally jumps off the pages.  Titan Books has deliver probably one of their best to date.  The quality of this book is just very high and it is aimed to satisfy the hardest gamers out there.  And if you are not the biggest “Halo” fan and just looking to see what all the fuzz is about this book will make you run to the store, trip the person in front of you and buy this game ASAP! 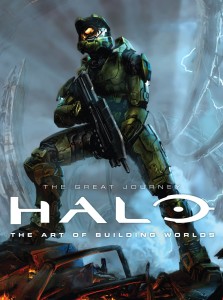 When it comes to “Halo”, it is one of the most beloved franchises by its very expressive fans.  This book right away has a big shoes to fill.  The book is not only visually amazing but it also covers over a decade of “Halo” ranging from “Halo: Combat Evolved” to “Halo: Reach” to even “Halo: Legends”.  It is a great celebration of the art from the franchise. The book covers everything from characters to landscapes to weapons and includes with sketches and concepts art by many acclaimed artists such as Ashley Wood, Alex Chu, and Frank Capezzuto.

The book features an introduction from “the face of Halo,” Frank O’Connor.  It is short but sweet and definitely reaches out to “Halo” fans and would get them pumped for this book.  The idea of “Halo” itself just screams “give me an art book”.  There is so much amazing design that goes into the characters, landscapes, weapons and just the “Halo” universe itself.  This book is a true must for “Halo” fans awaiting the next addition to this fantastic series.