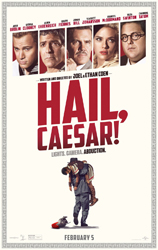 The Coen brothers seemingly find a way, movie after movie, to blend genres and create something completely unique, pushing the envelope about what theater goers expect in terms of storytelling, plot, and character development. “Hail, Caesar!” is no different. There’s no denying the Coen brothers talent when it comes to their dramatic works, but when they focus solely on their comedic efforts, it yields a unique array of ideas. They’ve crafted cult classics, toe tapping musicals, and dull remakes. “Hail, Caesar!” falls on the high end of that their comedic works.

There’s a pretentious nature to what the Coen brothers do. There’s an inside joke to a lot of their movies, and if you don’t get, they won’t tell you. The inside joke to “Hail, Caesar!” is the film industry, celebrities, the 1950’s, and I’m sure something else. Someone my age may not understand the mocking nature of the inner workings of the movie studios, the nuances of an era before my time, or the parody nature of the movies shown during the fabulous fifties, but I still enjoyed the oddball nature of “Hail, Caesar!”. It’s a blown kiss and slap in the face to the Hollywood industry.

Eddie Mannix (Brolin) is a “fixer” for Capitol Pictures. His job is to run around all day, making sure the press doesn’t get wind of the latest shocking scandal (a starlet having a child out of wedlock), making sure productions are up to snuff, and that the men financing everything are happy. Of course for “Hail, Caesar!”, he’s also trying to find out where studio star, Baird Whitlock (Clooney) has run off to. Well, he hasn’t gone on one of his alcoholic benders or, as his wife puts it, at some floozies place. But Baird has been kidnapped.

Most other movies would make this plotline essential to the storytelling aspect of this movie, but the Coen brothers find entertainment in the array of movie products, random actors and actresses, and Eddie’s personal home life. There are so many cameos in this movie, it’s impossible to talk about every single one, as well as their subtleties that they add to the plot, the various themes, or their potential jab at real-life events and celebrities. Of course, as I stated earlier, the character may be a part of an inside joke that you may or may not get.

So in essence, it’s a Coen brother’s movie. “Hail, Caesar!” is rich with witty dialogue involving thick-headed actors and sophisticated directors. Channing Tatum, Scarlett Johansson, Tilda Swinton, Jonah Hill, Wayne Knight, Frances McDormand, and others are scattered about, adding their own flavor to the movie. At times it can be overwhelming, but equally underwhelming at times, especially when we find out who has kidnapped Baird and why.

Just take a step back and accept that this is a screwball, ensemble comedy. With that in mind, you should be able to enjoy it’s, at times, confusing narrative. like a fine wine, I expect “Hail, Caesar!” to age gracefully and be a delight to watch occasionally, much like “Raising Arizona” or “The Big Lebowski”. It’s not a masterpiece by “Fargo” and “No Country for Old Men” standards, but it’s certainly a fine addition to the Coen’s collection. 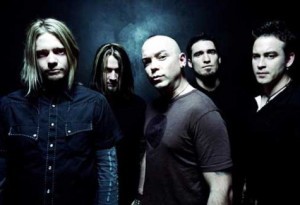 Will Hunt is a hard rock drummer who plays or has played with everyone from Evanescence and Black Label Society to Tommy Lee’s Methods of Mayhem and Static-X. Hunt is also a part of the rock super group Dark New Day consists of Brett Hestla (Virgos Merlot), Troy McLawhorn (DoubleDrive), Clint Lowery (Sevendust) and Corey Lowery of Stereomud. The group is set to release their 3rd full length studio album titled “Hail Mary” in February and Media Mikes had the chance to ask Will about his work on the record and how he juggles working with so many different bands at the same time.

Adam Lawton: What type of approach did you take with your playing on the new album “New Tradition”?
Will Hunt: We were going for a little more of a structured sound this time as opposed to what can be heard on “12Year Silence” where everything is just sort of thrown in. The drum parts on this record were more composition than improvising. I played knowing that I wanted the drums to sound huge, and the way to do that is to give them room to breathe and leave space for that in the parts. Corey Lowery and I wanted the bottom end to be ridiculous.

AL: How does this album compare to the previous releases from Dark New Day?
WH: Like I said, we were going for a more structured sound and that’s what we got. We were really experimenting, which in some ways was liberating, in other ways we now know what we wouldn’t do in the future! (Laughs) All though, we’re very proud of the experimentation and what we got from this album.

AL: Does the band have any plans to tour in support of the release?
WH: No touring plans for this release. I’m not saying there won’t be a couple of shows here and there if our schedules can line up. We obviously would love to rock some shows together, but there no concrete plans at this time

AL: Personally what do you find to be the most difficult thing about working with multiple bands and projects at the same time?
WH: It’s like air traffic control! (Laughs) You just have to make sure to get all the projects in line and land them without crashing!( Laughs) Sometimes it works, sometimes not, but I love it! I can’t play and write enough.

AL: Can you tell us about any of your other projects that are in the works as we speak?
WH: Yes. I am officially a member of David Draimen’s new band, DEVICE. Our 1st single “VILIFY” is hitting radio in February, and the self titled album will be released in April with a tour to follow. Our 1st show is going to be at SXSW in Austin. I’m really excited about this band, I think people are going to freak on how bad ass it is. The music is absolutely amazing, and I can’t wait for people to hear it! I’m also going to record the new Soil album which I’m really looking forward to. That will be a good time making music with some old friends!