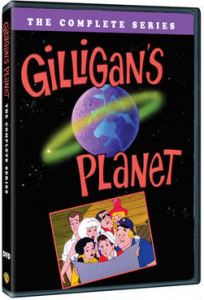 When I saw that this was coming out on DVD, I honestly have never even heard of it. I used to watch “Gilligan’s Island” as a kid though, so I know the idea around the show. This was in fact the second animated spin-off of the popular sitcom “Gilligan’s Island”. The first, which was “The New Adventures of Gilligan” aired in 1974-1975. What is cool about this is that the cast of “Gilligan’s Island” actually returned to their respective roles except for Tina Louise who played Ginger Grant. Dawn Wells ended up pulling double duty voicing Ginger as well as her own original character, Mary Ann Summers. Not the greatest of the bunch of cartoons that were born in the 80’s. If you are a hardcore fan of “Gilligan’s Island” and remember this show, it might be worth picking up.

Official Premise: It’s a brand new story about The Castaways! Leaving their tiny island after years and months and days, they built a little spaceship, crude but it could fly. They left their home and lost their way, between the stars and sky, they went from an island to star, lost on Gilligan’s Planet.” It’s true – The Castaways are now lost in space! They’re all here, in this strange, new world, Gilligan (voice of Bob Denver), the Skipper (voice of Alan Hale, Jr.), the Millionaire (voice of Jim Backus), his Wife (voice of Natalie Schafer), the Movie Star (voice of Dawn Wells), the Professor (Russell Johnson) and Mary Ann (voice of Dawn Wells). Now joined by Gilligan’s alien sidekick Bumper, they begin a whole new life on a whole new world, while still trying to repair the now space-worthy SS Minnow and return home from their infinite three hour tour. It’s something old, something new in this Saturday morning cartoon sit-com sci-fi romp!

I can’t imagine why 😉 but this show only lasted for 13 episodes in one season. The episodes are “I Dream of Genie”; “Turnabout Is Fair Play”; “Let Sleeping Minnows Lie”; “Journey to the Center of Gilligan’s Planet”; “Amazing Colossal Gilligan”; “Bumper to Bumper”; “Road to Boom”; “Too Many Gilligans”; “Space Pirates”; “Invaders of the Lost Barque”; “Wings”; “Super Gilligan” & “Gilligan’s Army”. This complete series DVD release is a Manufacture-on-Demand (MOD) release and it is available exclusively through Warner’s online store and Amazon.com. So this also means that if you do want this DVD, I would get it quickly since you don’t know how long it is going to be produced for. The episodes looks as good as you would think they would for this lost show. They are presented in their original aspect ratio: 4 X 3 full frame – 1.37:1. There are no additional special features included besides the episodes. 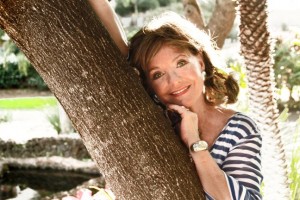 Dawn Wells is best known for her role as Mary Ann Summers, the young girl from Winfield, Kansas that takes an ill fated three hour cruise and ends up stranded on “Gilligan’s Island.”

Born in Reno, Nevada, Ms. Wells represented the state in the 1960 Miss America Pageant. She studied theater at the University of Missouri. After graduation she headed to Hollywood. In 1964 she won the role she is most identified with, Mary Ann on “Gilligan’s Island.” Following the show’s cancellation in 1967, she continued to work in television, appearing on such popular shows as “The Invaders,” “The Wild, Wild West” and “Bonanza.” She also appeared in a pair of films directed by Charles B. Pierce: “Windtalker” and ”The Town That Dreaded Sundown.”

She has continued to work steadily and can now be seen in the new Jason Lockhart comedy, “Silent But Deadly.” To promote her appearance, Ms. Wells sat down recently with Media Mikes to talk about her new film, her love of theatre and what Mary Ann has planned for the 50th Anniversary of “Gilligan’s Island.”

Mike Smith: Hello from Kansas City, just 3 hours north of Winfield, Kansas!
Dawn Wells: And an hour and a half west of where I went to college in Columbia, Missouri.
MS: M-I-Z Z-O-U
DW: (laughing) that’s it!

MS: Can I ask what attracted you to the film?
DW: Well, I’ve never played a grandmother. I’ve never played an elder role on film at all so I thought it would be fun. And I love the idea of supporting new talent. I thought it was cleverly written, the cast was great and I really enjoyed liked the idea of working with Jason. I’m at that stage in my life where I’m not trying to build a career. I get to do what I enjoy. I enjoyed it when I read it so I took the shot. I loved it.

MS: A few of your co-stars in the film are, like yourself, well known television personalities. Were you able to spend some time on the set talking about your various experiences on the small screen?
DW: Surprisingly, when you’re shooting on set there really isn’t a lot of free time to chat. We did get to know each other during rehearsals, of course. And after we finished filming. I’ve stayed close to many of them. Of course, Lee Meriwether and I both share the Miss America pageant together. And many of them I had worked with in the past on television.

MS: You’ve done everything – film, television, theatre – do you have a preference?
DW: I do enjoy acting in movies but I’ve always loved theatre best. I love the rehearsal time. I love having a live audience and being able to read an audience. I’ve had the chance to play so many interesting roles on stage.

MS: As a follow up, as an actor is it preferable to do a character on stage, where with each performance you can continue to discover your character or film, where you’re often pressed for time so you have to go by your instincts?
DW: Good point. On film you are rushed for time and many times you’ll finish a scene, move on and then think to yourself that there was something else you could have given during that scene. One main difference is reaction. If you’re doing a film, let’s say during the scene someone tips a cup over. Not a problem, you just do it again. On stage, you have to improvise. Let’s say I have a scene where I’m supposed to walk across the stage, grab a vase and toss it out a window. So I make my entrance, cross the stage and discover the vase is not there. You’re in the middle of the performance (laughs)…what can you do? Do I find something else to pick up? Do I walk off stage, grab the vase and then come back in? All those things go through your mind. It’s like a football game. You’ve got the play and you’ve got the play clock in your head. Theatre definitely keeps you on your toes because nothing is perfect. There’s really no such thing as a perfect performance. I remember George C. Scott once said, “you’re doing 8 performances a week. If you get 3 of them in a row good, that’s a miracle.”

MS: 2014 marks the 50th Anniversary of “Gilligan’s Island.” Are there any celebrations or gatherings currently planned that you might be taking part in?
DW: 50 years. Sadly I just returned from Russell Johnson’s funeral (NOTE: Johnson played “The Professor” on the popular show). I still catch the show on occasion. Simple and funny and in black and white. Alan Hale and Jim Backus. It was such a joy. It came out during some tough times in the 1960s, when the country was having some very tough times. And I think we helped people laugh.

MS: “Gilligan’s Island” and the Beatles. You both kept America going.
DW: (laughs)
DW: I’m not aware of any celebrations yet but I do have a book coming out in September. I’m just finishing up the last chapter. It’s kind of a “What Would Mary Ann Do?” Remember, when we were dropped off on the island there was no birth control (laughs). Mary Ann got the most fan mail. Everyone loved her. And I feel that she was the rudder. The book is funny…it has a lot of my advice. I’m not sure about the title yet. I don’t know if it will be “Mary Ann: Good Girl” or “What Would Mary Ann Do?” but I do know it will be fun.

MS: What else do you have coming up?
DW: Well, I’m finishing my book. I’m also going to be doing the play “Steel Magnolias” in North Carolina this March. I’m working on a documentary. This is going to be a very busy year for me.