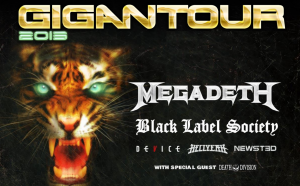 The rolling hills of the CMAC Center were alive with the sound of metal on July 6th as the Gigantour package made its way to the small upstate town of Canandaigua, NY. The tour now in its 6th run has featured acts like Dream Theater, Lamb of God and Fear Factory. This year’s lineup is again being headlined by tour creators Megadeth along with Black Label Society and Hellyeah which features former members of Mudvayne and Pantera.

The first thing that came to mind when looking at this year’s “Gigantour” lineup was that it read like a who’s, who of rock artists who are now in fact performing with a different band than the one they are normally associated with. Everyone from Disturbed front man Dave Draiman to Rock and Roll Hall of Fame member Jason Newsted is out touring their new projects under this one bill. Before even entering the venue the parking lots were a bevy of discussion about the various new material that was about to be bestowed upon those in attendance.

Kicking off the festivities was Death Division who hails from Hollywood, California and features former Danzig bassist Jerry Montano and Morbid Angel drummer Tim Yeung. The group’s performance was on par however it did very little to capture the audience’s attention. Next up on the bill was former Metallica bassist Jason Newsted’s newest group simply titled Newsted. Jason seemed very comfortable in his role as front man and the band which also features Staind guitarist Mike Mushok were incredibly tight. Mushok is a great addition and seems to be able to stretch his legs a little more performing a number of blistering solos. Due to time constraints however the group was given the signal to leave the stage prior to their set completion which left fans chanting for more. Hellyeah took the stage next performing one of the better sets of the day. Vocalist Chad Grey (formerly of Mudvayne)worked the front of the stage like a consummate pro pausing only briefly to introduce the bands next song which generally started with the rumble of legendary Pantera/Damage Plan drummer Vinnie Paul’s bass drums. Highlights of the groups set included a in your face rendition of “Drink, Drank, Drunk” which had the audience singing and fist pumping throughout its duration.

After a brief speech by Jim Florentine of “VH1’s That Metal Show” Device would take the stage in a synth induced swell which did very little to grab the audience which now numbered around 2000-2500 attention. The noise at times seemed chaotic and with the only real exception being that of former Evanescence drummer Will Hunt who provided a majority of the excitement. In fact there was such a lull in the crowd that singer Dave Draiman attempted to revive the situation several times with little result. The leather and denim clad, Zakk Wylde fronted Black Label Society was up next performing material that covered each of the group’s albums. Though I would have liked to hear more vocals and less guitar soloing songs such as “Forever Down” and “Bleed for Me” were personal highlights. Megadeth closed out the night performing in front of massive video and lighting rigs which only elevated the extremely technical playing of Mustaine and company. The set featured such classics as “Hangar 18” and “Sweating Bullets” as well as new material from the group’s recent release “Super Collider” before rounding out the evening with “Symphony of Destruction” and “Peace Sells”.

Though the day consisted of up and down performances and low attendance numbers don’t let that steer you away from buying a ticket to one of the remaining dates on the tour. Megadeth’s performance alone is worth the price of admission and if you’re interested in checking out what former members of Metallica, Disturbed and Pantera are doing then you will certainly want to check out this year’s Gigantour.